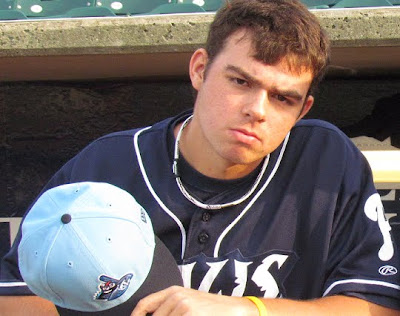 Monday evening at 7 PM Eastern, the 2011 MLB Draft is set to begin. Phillies fans that are used to getting excited over that first selection of young, mysterious talent will have to wait just a bit longer this time around. Philadelphia will not pick in the amateur draft’s opening round, due to their signing of free agent pitcher Cliff Lee last off-season (they lost that pick to Texas), however, the were granted a selection in the supplementary round that follows the first round because outfielder Jayson Werth left, as a free agent. The Phillies’ first pick in this year’s draft will be 39th overall.

In recent years, the Phillies have shown they are partial to take what are known as “toolsy” offensive guys with their earliest picks, as proven by the selections of players like Greg Golson (1st round, 2004), Anthony Hewitt (1st round, 2008), Zach Collier (supplementary round, 2008) and Kelly Dugan (2nd round, 2009).

But, while there is a bit of a variance in the Phillies’ typical approach, positionally, one thing sticks as a more reliable thing…dating back to 2001, in years when the team picked in one or both of the opening two rounds, they have taken a player out of high school with their first pick 7 out of 9 times. In addition, 13 of 18 total picks made by the Phillies in the first, supplementary and second rounds since 2001 have been high school players. So, predictions that the Phillies go young early surely have basis.

Check back here in the coming days for details on early round selections and other highlights from the draft.