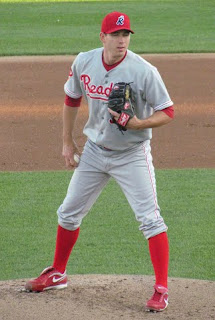 Throughout the autumn and winter months, I have been checking in with various Phillies minor league players to inquire about how they try to maintain their baseball acumen during the long, drawn-out off-season. This edition features 2009’s 15th round draft selection, righty pitcher Austin Hyatt.

The 6-foot-2-inch 180-pounder took some time to answer some questions, from his home in Georgia this week, about his off-season routine, his goals for the upcoming season and more. Read ahead to check out what Austin had to say.

Q: How much time off do you take from throwing during the off-season and what’s your routine like…anything new added to your work outs?

A: After the season I took off from throwing till about the week before Christmas. I started light, going about twice a week, and I’ve started to pick it up to about three to four times a week now and I’ve started to work some long toss in. I’ve kind of stuck with the same formula (as past off-seasons) with at-home exercises then working up to throwing.

Q: Obviously, for throwing, you’d need help to get it shape. Who do you partner up with, for your long tosses and throwing sessions?

A: I have a couple friends that live in the area that I went to high school with and played high school ball with. And mostly I throw with my brother, Jared, who played baseball at Georgia Tech and played in the minors for a couple years with the Texas Rangers. He’s definitely a good throwing partner. It’s good to have someone who can keep up with you.

Q: I’ve spoken with other guys who hold down a job over the off-season to make ends meet. Are you currently employed?

A: No, I don’t have a job right now. But, it’s funny, last off-season my brother and I bought a house and we renovated it. Kind of like “Flip This House” and it turned out to be pretty expensive and it took a lot more work than we anticipated. We worked from 8 in the morning till after 6 at night and it was kind of a busy, hectic schedule. This off-season, not having a job is kind of nice. It allows me more time to focus on work outs and having time to throw more often and focus on getting in better shape.

Q: Last season with the great second half and the Eastern League All-Star nod, you really had a remarkable year. What are your biggest goals heading into 2012?

A; I just want to keep it up. I would like to be, hopefully, in (Triple-A) Lehigh Valley. I just want to build off last year and keep winning games. What I focused on last year was developing a slider and continuing to throw my change up like I have the past couple years. I feel like I did that and I just want to keep building off of that. The strides I made last year in Reading will hopefully carry over with Lehigh.

Q: Last season with Reading you were managed by former big leaguer Mark Parent, who took a job as a big league bench coach with the White Sox this off-season. Potentially, when you take that next step, to Lehigh Valley, the skipper there is Hall of Famer Ryne Sandberg. Do you look forward to being mentored by another former big leaguer and a legend in his own respect?

A: Yeah, absolutely. I’ve heard nothing but good things about him and it would be an honor to be able to play for him. Those guys have so much experience and have been around the game so long that they have so much knowledge to teach the players coming up through the minors.I learned a lot from Parent in regards to how you play the game and how to conduct yourself in the club house and everything- on and off the field. It was really good getting to know him and I’m really happy for him to be going to a big league job, like everyone expected that he would be.

Q: Lastly, I just wanted to check and see if you have a departure date set to head down to spring training in Clearwater, FL.

Well, I don’t know exactly when yet. I was invited to big league camp and that begins, I believe, the second week of February. And if I’m not mistaken (the Phillies) said they’re going to send me information on that in the next couple of weeks probably.A; But, even before that, we have a mini camp on January 22nd. So, I’ll be going down for a 5-day camp on the 22nd. I’ll go down there for that, come back here (to Atlanta) for a couple weeks, then go back down (to Clearwater).