Back in 2008, Phillies lefty reliever J.C. Romero tested positive for banned substances and was subsequently suspended for the first 50 games of the 2009 season. Some felt the findings in Romero’s test tainted the World Series victory by Philadelphia that year. Romero contested that he had only used supplements purchased at local vitamin chains and the companies responsible for those items should be held accountable for mislabeling their products.

Romero took his issues to court, filing lawsuits in New Jersey Superior Court in early 2009 that named GNC and Vitamin Shoppe as defendants in addition to the manufacturing companies, Ergopharm and Proviant Technologies. According to the NY Daily News, testing done on the vitamins revealed that they were tainted with the banned substance, androstenedione, that Romero tested positive for. This month, nearly three years later, Romero has reached a settlement, which Romero hopes will clear his name and provide closure for Philadelphia fans. Terms of the settlement were not disclosed.

The 35-year-old recently signed with the reigning World Series champs, the St. Louis Cardinals, but the man who got the “W” in two of the Phillies’ four 2008 World Series victories clearly still has a soft spot for the city in which he experienced his best days, as he still has great concern for the validity of the club’s second ever championship.

“The amount of money (in the settlement) isn’t relevant,” Romero told the Daily News this week. “What is relevant is that people know my side. Some fans questioned my integrity. Now there is some closure and I can say the 2008 World Series was legit.”

In parts of 5 seasons with the Phillies, Romero went 6-6 with a 2.73 ERA and 4 saves in 273 regular season games. In 13 career post season games with Philadelphia, Romero posted a 2-1 record with a 0.87 ERA. The Puerto Rican born hurler was originally a 27th round draft pick of the Minnesota Twins in 1997. 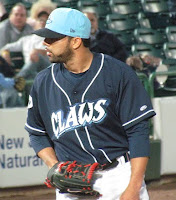 In 2009, as Romero pitched in the minors to get ready for his late start to the regular season, forced by the suspension, he offered these exclusive thoughts to PhoulBallz.com, when I asked him about the status of efforts to clear his name…

“We’re still in a battle, man. We got a couple law suits going out there. The whole thing has been a mess from the day that it happened. And the sad thing is that, knowing that everybody knows my case is totally different to what is happening with a good friend of mine, Manny (Ramirez), what happened with A-Rod, and all that. But, ya’ know, life is not fair. Sometimes things happen in life, and you can’t even explain it, you can’t expect it, I mean things happen, so this is just a bump in the road. You have to keep your head up and keep on battling.“Like I say many times, and I stick with it- in the end, you gotta really protect your career. And that’s the message that I’m trying to tell these kids (the minor leaguers)…there’s no union, there’s no MLB representative, commissioner…nobody’s going to protect your career. You gotta do it yourself. ‘Cause when everything’s said and done, you get suspended and you’re just by yourself. I learned that the hard way, and now I’m just moving forward.”

With all the legal matters behind him, and with the ability to truly move on, at long last, Romero also stated where his full focus will now be.

“Now I can focus on dominating for another five years, hopefully,” Romero told the Daily News.

Now that Romero’s a member of the team that stunningly eliminated the Phils from the 2011 postseason, I don’t think there are many Phillies fans that would care to see that happen….no matter how much love for their city he oozes.