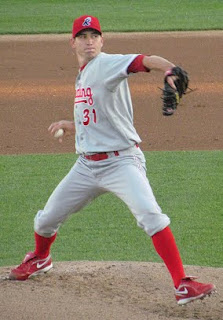 As exhilarating as finding out you’re starting the first game of the preseason schedule might sound, there was nothing overly dramatic about the way Austin Hyatt learned he’d be the guy who gets the 2012 campaign rolling for the Phillies on Wednesday afternoon in Clearwater, FL. The right-hander found out he would be pitching in Philadelphia’s exhibition opener against the Florida State Seminoles via a list posted on the clubhouse wall. It was just another day of work for the 25-year-old Hyatt.

Hyatt, an Eastern League All-Star last year, is excited to get a brand new season of Phillies baseball rolling. Expected to throw 2 innings, followed by a lengthy list of other pitchers that includes lefties Jake Diekman, Jeremy Horst, and Joe Savery along with right-handers J.C. Ramirez, Phillippe Aumont and B.J. Rosenberg, Hyatt expressed his high level of enthusiasm for the outing, despite the dull manner in which he discovered he’d be making the start.

“It’s an honor to start that game and launch a new year,” Hyatt said in a phone interview this week. “I’m looking forward to it. It’s exciting. I haven’t pitched on the Brighthouse Field, there, since I was in the Florida State League a couple years back, so it’ll be fun to get back on that mound.”

As a member of the Class-A Advanced Clearwater Threshers in 2010, Hyatt was named the Florida State League’s Pitcher of the Year, when he posted a 12-5 record with a 3.32 ERA and 181 strike outs in 146 1/3 innings pitched.

Typically, the Phils use younger pitchers and a few individuals that are in big league camp for the first time for their initial annual exhibition game against the FSU team. Knowing those facts, news of the start did not catch Hyatt by surprise.

At times, Hyatt, a 15th round draft selection out of the University of Alabama in 2009, has been in awe of his surroundings at big league camp, with all the Phillies established star power. One well known major leaguer that is no stranger to drawing the attention of younger players is Roy Halladay, who has made a considerable impression on the Georgia native, Hyatt, as part of his group for daily workouts.

“(Halladay) is all business in between the lines,” Hyatt stated with an inflection of wonderment. “He goes out there and works hard. He runs every drill full-speed and he’s in there, in the weight room, all the time just getting after it and working hard. Just seeing a guy with that much big league experience and success still that hungry to go out there and work the way that he does is just a really cool thing.”

And despite the great levels of exhilaration from being in camp among the elite talents of the Phillies’ roster, the 6-foot-3-inch 205-pound Hyatt has been able to relax and enjoy his time among teammates that he considers close friends away from the game.

“It’s great to be here with so many guys I played with last year. Phillippe (Aumont), (Jake) Diekman and (Justin) De Fratus were all my roommates, so we’re really close. And then with guys like J.C. (Ramirez) and (Freddy) Galvis, a lot of guys I’ve played with, it makes it a lot easier and makes coming to camp a lot more comfortable, knowing you get to share it with these guys,” Hyatt said.