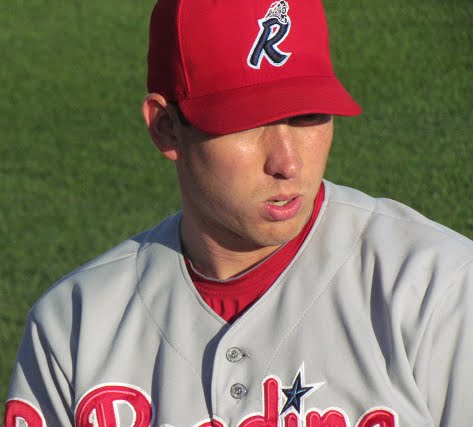 Austin Hyatt is the non-rostered pitcher with the best shot to crack the Phils in 2012.

It’s almost here. The grass may still be brown for most of the greater-Philadelphia region, but the sun is staying out longer. It is getting a little warmer. Baseball is almost here.

Oakland and Seattle each received a week head start on the Spring Training process reflective on their trip to Japan, where they open the season on March 28 in Tokyo. All other clubs, including our beloved Phils, will have their batteries report on Sunday.

Not everybody gets invited to big league camp: of course, the 40-man roster reports, but so do select non-rostered minor leaguers and veterans auditioning for a role on the big club. This year, the Phillies are inviting 18 non-rostered players to workout with the big club. Some figure to fit into the Phils’ immediate plans, while others have been invited to train as they prepare for the future. The majority of the players, veterans seeking another shot, will play on two-way contracts hoping they can catch fire or be the beneficiary of an injury. Or both.

Because they are reporting first, the first of two features will take a look at the pitchers the Phillies are inviting. Unfortunately for non-roster invitee pitchers reporting to Clearwater, the Phils already have 19 pitchers on the 40-man roster and a plethora of young, talented arms that will make it near impossible for any one of these pitchers to crack the roster for any period of time.

Preparing for the Future

Austin Hyatt was the no. 15 ranked prospect in my colleague Jay Floyd’s ProspectNation feature. As Jay noted, while Hyatt, who turns 26 in May, has been a little older for each level he has played in, Hyatt has had nothing but success. A Double-A All-Star for Reading, Hyatt tallied a 5-1 record with a 2.78 ERA and a .221 BAA after the All-Star break. Hyatt’s continued success puts him on the shortlist to be on standby if there is an injury in the rotation. It would not surprise me if Hyatt earned one of the two remaining 40-man roster spots at some point during the season and made a spot start or more for the Phils.

Chances of Making Phils out of Spring Training: B-. If Blanton is not ready, these odds increase to B. If Blanton and another starter are not ready, Hyatt is a slam dunk.

Chances of Seeing Time with Phils in 2012: B+. The Phils, although relatively healthy, have used 8 or more starters the past three seasons. With Andrew Carpenter and Scott Mathieson out of the way and Vance Worley currently firmly entrenched in the rotation, the emergency starter title is up for grabs. Hyatt makes the most sense for that role.

If Something Goes Wrong…

As discussed at the time he was signed, I felt Pineiro was a great depth signing. I just don’t think his present skill-set can outperform Joe Blanton, Kyle Kendrick, or Austin Hyatt to win a starting spot and I would list almost every other righty on the 40-man above Pineiro in terms of filling the bullpen. If some doomsday injury nightmare happens, Pineiro will be nice to have around, but let’s hope it doesn’t get that far.

Chances of Making Phils out of Spring Training: D-. The door isn’t completely shut and Pineiro’s veteran status helps with a manager like Charlie.

Chances of Seeing Time with Phils in 2012: D. Pineiro needs at-least two starters and likely a few relievers to fight injuries or ineffectiveness to get his shot in red pinstripes.

Sanches was developed in the Phils’ system and saw action in 30 games across 2006 and 2007. Sanches, 33, was very effective last year against righties for the Marlins, averaging over a K/IP and posting a .195 BAA. Sanches could be a useful piece out of the bullpen, primarily against righties. Sanches has better splits than Chad Qualls and his fastball/slider/sinker repertoire profiles well for Citizens Bank Park.  It’s a relative long shot, but Sanches, to me, is the one veteran to watch in Spring Training to see if he can win a role in the Phillies pen.

Chances of Making Phils out of Spring Training: D+, primarily for success against righties

Chances of Seeing Time with Phils in 2012: C. Sanches should not be slept on. If the Phils need an immediate stopgap reliever to plug in for an injury, Sanches should be in the conversation.

Valdes, for me, is Sanches from the left side. Valdes, 34, was successful in 2011, in small samples, against both righties and lefties but had tremendous success striking out and retiring lefties. Valdes does not walk many batters and struck out over 12/9 IP. If there is one veteran lefty that could sneak up on everyone and make the Phillies out of camp, it is Valdes.

Chances of Making Phils out of Spring Training: D, primarily for success against lefties

Chances of Seeing Time with Phils in 2012: C, primarily for left-handedness

Horst was acquired from the Reds for Wilson Valdez on January 25 presumably to save about $600K for future moves. Horst could be more than the product of a salary dump, though, should Antonio Bastardo and/or Dontrelle Willis face injury or ineffectiveness. Horst faced only 69 batters in 12.1 innings in the Majors last year for Cincinnati and hitters hit .290/.348/.468 against him, but fared better in Triple-A. In Louisville, Horst posted a 2.51 ERA with 7.36 K/9 IP with a .211 BAA. Horst could be groomed to be an effective long-man: on 6 occasions in 2011, Horst pitched 3 innings or more for Louisville and posted a 0.83 ERA in those outings.

Horst is 26 and will need a strong spring to leapfrog Joe Savery and Jake Diekman as the 3rd lefty option coming out of camp.

Chances of Making Phils out of Spring Training: D primarily for left-handedness

A product of University of Lousiville, BJ Rosenberg, 26, split 2011 as part starter, part reliever for Double-A Reading. Rosenberg appeared in 39 games and posted a .266 BAA and has averaged about a strikeout per inning while keeping walks and home runs low. Rosenberg’s success and versatility has probably earned him a role in the Iron Pigs bullpen for 2012 but will likely need a miracle to crack the Phils’ roster at any point in 2012.

Chances of Seeing Time with Phils in 2012: F. Sorry BJ, there are just too many other pitchers ahead of you that are already on the 40-man roster.

Allentown is Beautiful in the Summer

Bush is about an exactly league-average pitcher over the last three seasons (0.3, 0.1, and 0.1 fWAR for 2009, 2010, and 2011). League average, for a veteran, won’t make the Phils. Bush struggled with Texas  and with the Cubs’ Triple-A affiliate before turning it around in Lehigh Valley last season, posting a 3.91 ERA. Bush’s fastball/curveball set have lead to about a 40% flyball rate over his career and about 10% of those leave the yard. You can tell me until you are blue in the face the Bank plays neutral but I do not want to take my chances with those rates in a hot, Philly summer.

Projected Role: No. 3 starter for the Iron Pigs

Chances of Seeing Time with Phils in 2012: F-. Even if Bush puts together a phenomenal year in Triple-A, there are too many guys in front of him to get a shot. See: Brian Gordon, 2011.

Elarton comes with an impressive pedigree: former first-round pick out of high school. But, that was in 1994, turns 36 next Wednesday, and Elarton has not played affiliated ball in the US since he posted an 8.24 ERA in 19.2 innings for Triple-A Charlotte in 2010. I also have a sneaking suspicion either he or a family friend routinely edits his Wikipedia page based on all of the superlatives currently on it.

Chances of Making Phils out of Spring Training: None

Chances of Seeing Time with Phils in 2012: Zero

When I saw the Phillies signed Misch to a minor league deal, I wondered why. Not why the Phillies would sign Misch, who is talented enough to be a Major League pitcher, but why a player like Misch would not choose to sign with a team where he might have a better opportunity to reach the Majors. Misch, 30, has been primarily been used in the Minors as a starter and a reliever in the Majors; he relies primarily on a sinker and change-up. Misch has pitched almost exactly to league average and is a Quadruple-A player. There are many other teams who could have used Misch effectively in the Majors this year but barring Misch leaping Savery, Diekman, and probably Horst, it is unlikely he will reach the Majors.

Projected Role: Either 4th starter in Lehigh Valley or secondary lefty option out of the ‘pen

Purcey saw action with Toronto, Oakland, and Detroit last year. The 6’4 lefty from the University of Oklahoma relies on a fastball-slider combo; Purcey had success in the high Minors and early in his career as a strikeout pitcher but has seen his strikeouts decline while his walks have increased. Purcey was one of many lefties stockpiled by the Phils. Like the others, he will have to leap a strong rookie crop already on the 40-man roster to get his shot to play in red and white pinstripes.

Projected Role: Main lefty option out of the ‘pen for Iron Pigs