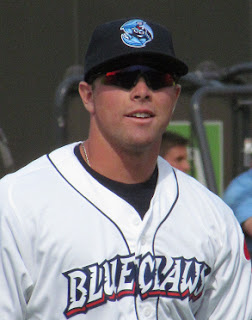 A surprising name has emerged as the star performer in the lineup for the Class A Lakewood BlueClaws in the early going this season. With a few better known individuals sporting the ‘Claws’ white and blue this season, it’s outfielder Brian Pointer that has stood out and helped the team stay competitive  in many games. Highly rated third baseman Maikel Franco, along with speedsters Gauntlett Eldemire and Aaron Altherr, as well as former top draft choice Kelly Dugan have all been outshined this year by a guy that was a virtual unknown to many.

Drafted in the 28th round by the Phillies out of Galena High School in 2010, Pointer quickly signed his first pro contract and was active with the Gulf Coast League Phillies by season’s end that year. Combined in 2010 and 2011 with the GCL club, Pointer put forth some solid output, with a .278 batting average to go along with 6 HR and 25 RBI in 52 games, but it wasn’t enough to garner great attention. The new season has proven to be a bit of a bust-out month for the youngster and the interest in the soft-spoken Nevada native has deservedly begun to grow.

The 20-year-old, who has split his pro time quite evenly across all three outfield positions thus far, says he owes his success to a consistent swing and a focus on the small things, which he says should be a key focus for children who hope to play baseball beyond their teen years.

“I’m just trying to hit the ball solid and trying to stay up the middle and everything and keep it in there and hit the ball hard, that’s basically it,” Pointer said in a recent interview with PhilliesNation.com’s Jay Floyd.

“Yeah, (I) try to do the small things and that can take care of the big picture. Do all the small things growing up and that’ll eventually pay off for you and help build a consistent physical approach in all aspects of a player’s game.”

Pointer thrives when the matchup is in his favor. Heading into action on Tuesday, the 6-foot tall 190-pound lefty hitter had posted an astounding .359/.395/795 line against right-handed hurlers.  To become a more complete hitter, Pointer will need to improve his numbers against lefty hurlers.

Pointer grew up watching the San Francisco Giants and became a big fan of Gold Glove Award winning first baseman J.T. Snow.  The veteran of 16 seasons inspired Pointer to play hard at all times, because you never know who is watching.

“He’s a guy that I liked to watch a lot. Just a guy who played hard and played the right way. That’s something that you can look at and take something from.”

It’s clear, from the type of production Brian Pointer is putting forth lately for Lakewood, that he’s got his sights set on inspiring someone else to play baseball the right way.

Double-A Reading first baseman Darin Ruf continues to tear up the Eastern League.  With 2 hits on Tuesday, Ruf raised his batting average to .400, which is tops in the EL.  The 25-year-old was a 20th round draft choice in 2009.

RHP Tyler Cloyd had another outstanding start for Reading on Tuesday, earning the win with 7 scoreless innings while striking out 5 and walking none.  In 4 games this season, including a spot start for Triple-A Lehigh Valley, the 24-year-old Cloyd is 4-0 with a 1.80 ERA.  Cloyd was an 18th round draft pick in 2008.

The Class-A Advanced Clearwater Treshers were held without a hit by the Brevard County Manatees for 8 innings on Tuesday, until a double by outfielder D’Arby Myers and a single by outfielder Peter Lavin broke up the no-hit bid and gave the Threshers a 1-0 walk-off win.

Mike Fontenot has gone 3-for-7 with 2 walks, a double and an RBI in two games, since making his season debut with the IronPigs on Monday.