Welcome to the (semi-)weekly minor league wrap up.  This edition takes a glance at each level of the Phillies’ developmental system and details hot and cold players from each club. 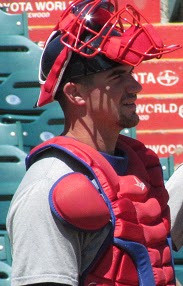 Local product Bob Stumpo (pictured, right) has been hot for the Class A Lakewood BlueClaws through his first 5 games with the club. The West Chester University grad, who was a 33rd round draft selection in 2010, has gone 10-for-21 in the South Atlantic League thus far, after being re-assigned from Clearwater. Combined at two levels this year, the switch-hitting catcher posted a .405 batting average through action o Saturday.

Brian Pointer, who had been a standout star for the BlueClaws in the opening three weeks of the season, hit a slow spell this week, going 1-for-20 over a stretch of five games to drop his batting average over 50 points. Pointer still sported a .253 average with 5 HR and 19 RBI through 26 games through action on Saturday. The lefty hitting Pointer was a 28th round draft choice by the Phillies in 2010.

Well regarded third base prospect Maikel Franco has seen his production drop off lately. In a 9-game stretch that ended Friday, the 19-year-old third baseman had gone 2-for-35 (.057 avg), a slump that dropped the Dominican born slugger’s average from .295 down to .208.

Third baseman Cody Asche has been steadily showing his worth this season for Class A Advanced Clearwater. The Phillies’ 4th round draft pick from 2011 sported a .322 batting average, through action on Friday, which ranked him 7th in the Florida State League. The 21-year-old attended the University of Nebraska prior to turning pro. Asche batted .192 with 2 HR and 19 RBI in 68 games with short-season Williamsport last year. 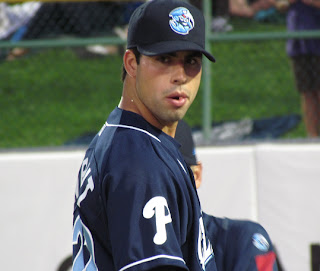 Left-handed starting pitcher Austin Wright (pictured, left), 22, has been excellent for the Threshers, posting a 4-0 record with a 2.40 ERA and a .182 batting average against in 5 outings this season. Additionally, the 8th round draft selection from 2011 has struck out 37 batters while walking 12 in 30 innings. Wright, a University of Mississippi product, went 4-3 with a 3.03 ERA while striking out 85 batters and walking 22 in 68 1/3 innings in 15 games combined for short-season Williamsport and Lakewood last season.

Right-handed hurler Garett Claypool has had a troublesome season thus far, tallying a 9.98 ERA through 9 relief outings for the Class A Advanced Clearwater Threshers. The 23-year-old UCLA product had the worst outing of his career on Friday, when he was charged with 6 earned runs without recording an out in an appearance against Charlotte. Claypool was terrific last season, when he sported a 5-7 record with a 3.47 ERA in 27 games (23 starts) for Lakewood.

Reading second baseman Cesar Hernandez (pictured, right) has picked up his offensive game lately, posting a .385 batting average in his past 10 games, ending Friday. Hernandez capped off a stretch in which he had multiple hits in 5 of 8 games with a 4-for-5 effort with 2 doubles and 3 RBI in Friday’s victory over Erie. The 21-year-old Venezuela native sported a .268 batting average in 119 games with Clearwater last season.

Outfielder Leandro Castro has struggled lately for the Double-A Reading Phillies. The 22-year-old went 3-for-32 (.091 avg) over a ten game stretch that wrapped up Friday. Overall this season, the Dominican born Castro is batting .212 with 1 HR and 15 RBI in 24 games, through action on Friday.
Lehigh Valley

Lefty reliever Jake Diekman has been tremendous out of the Triple-A Lehigh Valley IronPigs’ bullpen this season. In 11 outings, the 25-year-old has posted a 1-0 record with 4 saves and a 0.73 ERA. Additionally, Diekman’s strikeout to walk ratio (20:3 in 12 1/3 innings) is just about as good as it gets. Diekman was the Phillies’ 30th round draft selection in 2007.

Domonic Brown is still without a homerun through 24 games with the Triple-A Lehigh Valley IronPigs, after action on Friday. The top rated Phillies prospect entered the weekend with a .247/.292/.337 line through 24 games.

Outfielder Scott Podsednik has posted a .190 batting average for the IronPigs through 17 games, prior to Saturday. Podsednik batted .309 in 31 spring training games with the Phillies this year.