Ryan Howard continued to test his recovering Achilles tendon as he rehabbed for the second time in as many nights with the Class A Lakewood BlueClaws on Friday. The 32-year-old slugger has been sidelined following off-season surgery to repair the tendon he ruptured in the final at bat of the Phillies’ 2011 postseason.

In game action on Friday, facing highly regarded Nationals prospect Alex Meyer, who throws a fastball that ranges from 96-98 MPH, Howard went 1-for-2 with a single and a strike out. Howard played first base for five innings and looked good, moving laterally with no problems and completing the end of three different BlueClaws double plays with ease. The efforts on Friday followed his 2-for-4 effort on Thursday, in which laced two singles, hit a Sac fly and drove in three runs as the Lakewood designated hitter.

Following the game on Friday, Howard told the media that he is slated to return to Lakewood for another rehab game on Saturday, in which he will again serve as the team’s DH.

The BlueClaws won Friday night’s contest against the Hagerstown Suns by a score of  6-1, behind a strong pitching effort from lefty Ethan Stewart, who allowed just one unearned run in six innings of work, and the hot bat of Chris Duffy (15-game hitting streak), who put the BlueClaws ahead in the 8th inning with an RBI single. Additionally, third baseman Maikel Franco mashed a Josh Smoker pitch into the night for a grand slam that capped the scoring for the ‘Claws in the 8th frame.

Following his outing, Howard spoke with a few members of the media and offered up the following quotes…

Howard on playing the field:
“Tonight felt pretty good. You know, foul balls- was able to move laterally, or try to get breaks on balls. Depth perception will probably be the biggest thing, um, getting used to the throws, cutters, sinkers, all that kind of stuff. But, that just comes with the reps.”

Howard on what will come next for him:
“I’ll be here (Saturday) for sure. That may be it, either (Saturday) or Sunday. And then, move on to the next one…either Lehigh or Reading, one of the two.”

Howard on not getting a 3rd at bat in the contest on Friday:
“It is what it is. You know, you go out and play. It’s all about, now, just play and working back into it. You don’t want to overdo it. It’s only the second game. There’s still plenty more games to go.”

Howard on loosening up gingerly in pregame warm ups:
“That’s how I do it regardless. I don’t go full blown sprints. Just try and save it for the game. It’s just getting loose.”

Howard on how it felt playing first base, rather than only serving as the DH:
“It felt good. It felt good. You know, being able to get the reads off the bat. Just seeing double plays and just being a part of the- just getting throws and everything. It felt good.”

Howard on being able to bond with the young prospects while he rehabs:
“I mean it’s cool to be down and see the guys get a little hyped up, but at the same time, I just tell ’em, ‘Hey, we gotta go out there. We gotta go play!’ I just try to give them a little bit of knowledge here and there, if they’re asking questions and what not. But, I just try to go out there and play and try to win a game.”

Howard on being the kind of player that cheers for his teammates and tries to motivate the club:
“That’s just me. No matter what level it is, we’re out there, we’re trying to win games. So, I mean, if you’re not then you shouldn’t be here. You know, I just try to get the guys a little worked up, get them out there ready to go, trying to win a game.”

Howard on whether there’s a time table for a return to the Phillies:
“There’s no real time table. I mean, just take these games till I feel comfortable. Just continue to get some reps, get in game situations and see where we are from there.”

Check out more images as well as video footage of Ryan Howard’s single from Friday below. 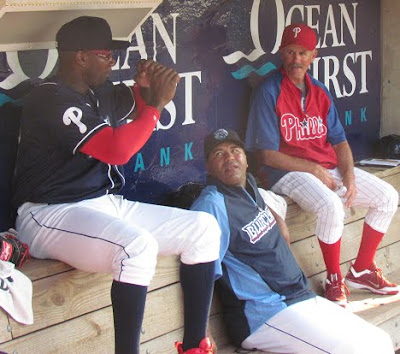 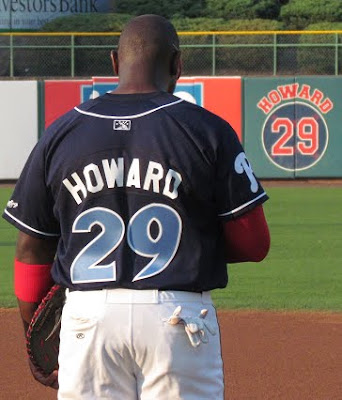 Anthem with his retired number in the distance

In the field, first inning

Checking out game action from the dugout