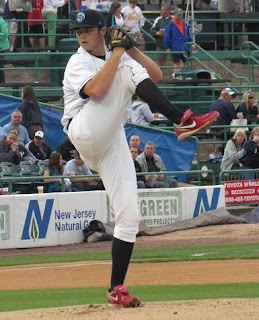 It’s certainly been an unusual summer for local baseball fans. In recent years, the Phillies have displayed divisional dominance, and, while doing so, they have swapped top rated minor leaguers to beef up the big league roster for the impending postseason drive. This year’s struggles, during which the Phillies have only recently dug themselves out of last place, have presented an opportunity for the team to not only hang onto their more highly regarded minor league talents, but to deal away some established major league players and add to the organization’s collection of promising youngsters.

This month Mike Drago of The Reading Eagle conducted his annual survey of fifteen organizational minor league experts, made up of writers and other media members, designed to rank the top prospects in the Phillies’ developmental system. The prospect that was ranked at the top of the list was lefty hurler Jesse Biddle, who has had a strong season for the Class A Advanced Clearwater Threshers in the Florida State League.

Flattered by the honor, the 6-foot-4-inch 225-pound Philadelphia native was clear in stating that he isn’t fully pleased with such rankings. Biddle has his eyes set on getting better each time out and on the ultimate goal of reaching the major leagues.

“Having seen the talent throughout this system, top to bottom, it is an honor to be considered in the same category as these players,” Biddle said. “But, I also understand that being a prospect only gets you so far in the game between the lines, because (the field) is the only place that counts.”

The Phillies’ 1st round draft selection from 2010 feels that there is much room for improvement in his game, despite the solid statistics and the recognition that he has attained.

“I think that my output this year has been up and down. This is mostly attributed to the natural adjustments of moving up a level, but, also, I have spent most of the year working as hard as I can to learn as much as possible. I am not satisfied with all my results,” Biddle stated.

More focused on a few lackluster outings than he is on the ones that garner the attention of experts who rate him so highly, Biddle take lessons from poor games and uses them as fuel to develop his mental toughness.

“I think I can pitch a lot better than I did in most of my outings,” Biddle said with tenacity. “But as my coaches always say, ‘It’s a process.’ I tried to make the most out of my bad outings and use them to make me a better pitcher in the long run.”

Overall, though, Biddle is more than happy to be pitching for the organization he grew up rooting for and never lets things like trade chatter impact his focus.

Not only did the different methodology approaching the trading deadline prevent the likes of Biddle and others from potentially being shopped or dealt away, but the Phillies added two players that are now ranked among their top ten prospects, according to the Reading Eagle’s survey results.

The participating individuals in the Reading Eagle’s assessment, who are all close to the Phillies minor league system, were asked to rank their personal top 15, which were tabulated to determine the paper’s published list of ranked prospects. Those that offered their insight for the ratings included Matt Gelb, Jeff Schuler, Greg Giombarrese, Mitch Rupert, Brian Seltzer, Mike Drago himself and yours truly, Jay Floyd.

Lefty hurler Jake Diekman was left off of all but two submissions, due to his time spent in the big leagues this season. Service time in the bigs also kept infielder Freddy Galvis from being ranked as well. Despite the explosive offensive output of first baseman/ left fielder Darin Ruf this season, several reviewers, including myself did not rank Ruf because of his age, 26, which isn’t typically applicable to being a prospect.

Ahead are the listings of the survey’s top 20 prospects in the Phillies’ system.