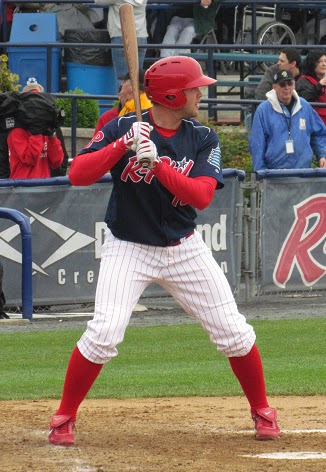 After an incredible season, Ruf will reportedly join the Phils tomorrow. Photo by: Jay Floyd

After Reading was eliminated three games to one earlier today, Mike Drago of the Reading Eagle is reporting that Darin Ruf will skip Triple-A Lehigh Valley and join the Phillies tomorrow for their game against the Marlins. The man known as #BabeRuf on Twitter tied or broke a few records within the last few weeks, including the record for most home runs in a month at any level of professional baseball with 20 in August for Reading and the records for most home runs and RBIs in a season for any player at Reading. Ruf earned the Phillies Minor League Player of the Year and Eastern League MVP and Rookie of the Year awards for 2012 by hitting .317/.408/.620 with 38 HRs and 104 RBIs in the regular season and lead the R-Phils into the Eastern League Playoffs as a Wild Card.

About a week ago, the staff here at Phillies Nation speculated if Darin Ruf would be added. The consensus was that there was no reason Ruf should not join the Phils. When Pete Orr was added to the roster as the 40th man, many, including myself, thought Ruf would not join the big club in 2012. Yet, the power hitting first baseman/left fielder will join the team tomorrow, defying expectations based on age, position, and prospect level. For more on Ruf, check out this episode of Phillies Nation TV, where our minor league expert Jay Floyd gives a detailed scouting report.