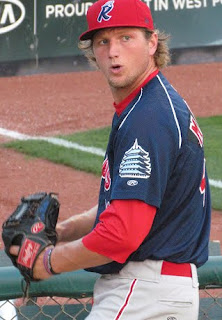 Disappointed and dejected, Ethan Martin stood at his locker following Reading’s 3-1 loss in game 3 of the Eastern League division series. The defeat put the R-Phils on the brink of elimination from the postseason, as Trenton grabbed a 2-1 lead in the best-of-five series.

The 23-year-old Martin, who was acquired by the Phillies in July, in the Shane Victorino trade, struck out 11 Thunder batters while walking none over 7 2/3 innings, although he was charged with 3 runs, only one of which was earned as he took his first loss since joining the Phillies organization. Martin had posted a 5-0 record with a 3.18 ERA in the Eastern League this seaso.

Trenton’s David Adams slapped an RBI single with two outs in the 8th inning that snapped a 1-1 tie and put the Yankees’ Double-A affiliate up for good. The inning began with a single by Tyler Austin, who was then sacrificed to second. A grounder by Adonis Garcia that was mishandled by third baseman Cody Asche put runners on first and second with one out. Ramon Flores then flied out and it seemed as though Martin, who dominated for the previous six innings, would work out of the jam. However, Adams came through with the big hit and ended Martin’s night.

Right-hander Tyler Knigge then came on in relief of Martin and served up another run scoring hit to Zoilo Almonte, that capped the scoring and put Trenton up 3-1.

“I went out there and did the best I could. I just didn’t make my pitches. I mean, I didn’t get them inside, or where ever they needed to be and they capitalized on it,” Martin said following an outing that most pitchers would exit with a W instead of an L.

Trenton kicked off the scoring in the opening frame of the contest when Flores came home on an RBI double by Almonte. The Thunder threatened to do more damage, but a single up the middle by Addison Maruszak was cut off by Reading shortstop Troy Hanzawa before it left the infield. The San Diego State product then gunned down Almonte, after he rounded third to thwart the danger.

Reading evened the score in the 3rd inning when Asche plated Tyson Gillies with an RBI double. Asche would record three of Reading’s five safeties on the night.

Lee Hyde picked up the win for Trenton, as he tossed a scoreless inning in relief of Thunder starter Mikey O’Brien and Tom Kahnle, who combined for seven innings of four-hit ball.

Prior to game 3, Reading placed utility man Jake Fox on the inactive list, as his wife went into labor. At home in Michigan, Fox and his wife are new parents to a baby boy. He was replaced on the roster by catcher John Hill.

Jay Floyd is PhilliesNation’s minor league insider.  You can read more from Jay by checking out his site, PhoulBallz.com.