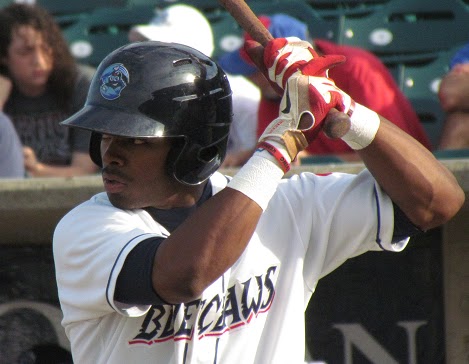 Collier is one of four added to the Phils' 40-man roster today. Photo: Jay Floyd

The Phillies announced today that outfielder Zach Collier and right-handed pitchers Ethan Martin, Trevor May, and Jonathan Pettibone have been added to the 40-man roster.

Collier, 22, was the Phillies’ supplemental first round pick, 34th overall, in 2008. The 6’2 lefty showed improved plate discipline in 2012, hitting .269/.333/.399 in his first year at High-A Clearwater. Collier had career highs in slugging and ISO and a near-career low in K%. Much of Collier’s improved power came in the form of his career high six home runs. Our minor league expert Jay Floyd just spoke to Collier on Sunday and the interview can be found here on PN.

Martin, 23, came to the Phillies in the Shane Victorino deal. Martin pitched a career high 157.2 innings in 2012 for Double-A Chattanooga and Double-A Reading. Marin was particularly impressive for Double-A Reading, posting a 5-0 record in seven starts with a 3.18 ERA. Martin was also a first round pick in 2008, drafted 15th overall by the Dodgers.

May, 23, one of the much-hyped Baby Aces, struggled in his first stint at Double-A Reading, posting an uncharacteristically high 4.87 ERA last year in 28 starts and 3 less K/9 IP than he had in 2011. May was rated as the number one Phillies prospect by FanGraphs headed into 2012. May was the Phillies’ fourth round selection in 2008.

Pettibone, 22, is the youngest of the Baby Aces who relies primarily on control for pitching success. Pettibone found immediate success in Double-A Reading (9-7, 3.30 ERA, 19 starts) and was promoted to Triple-A Lehigh Valley, where he was even stronger (4-1, 2.55 ERA, 7 starts). Pettibone has a small but real chance of seeing time with the Phillies in 2013. Pettibone was the Phillies’ third round pick in 2008.

The Phillies now have 38 men on their 40-man roster.