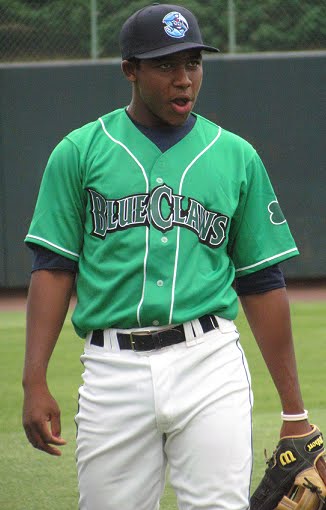 Franco's placement at two by BP is a little surprising but well deserved. Photo by: Jay Floyd

Baseball Prospectus released their Top 10 Phillies prospects list today. Like Baseball America and Minor League Ball before them, which we covered here and here, BP named lefty Jesse Biddle the Phillies Top Prospect for 2013. BP says Biddle is a legitimate Top 100 prospect in baseball. After Biddle, however, there are quite a few surprises.

Maikel Franco, eighth on BA’s list and ninth on Minor LB’s list, ranks in at an aggressive second on BP’s list. Franco enters his age 20 season coming off of a .280/.336/.439 year with 14 HRs for Lakewood and projects to start the year in Clearwater. A hot start could have Franco manning the hot corner for Reading. Franco’s positioning is surprising considering he is five places above the presumed 2014 starter at third base, Cody Asche.

Pardon my Bob Dylan/Manfred Mann reference, but Roman Quinn is developing quite the reputation. Quinn ranks fourth by BP after second and third place finishes in the other projections.

Adam Morgan continues to gain attention after his age 22 season that saw surprising success in Reading. Morgan will compete for the IronPigs’ rotation and probably is not that far away from reaching the Phillies. BP liked him just about as much as the other prospectors, placing him at #3 compared to #2 and #5 finishes on the other lists. His possible future rotation-mate Ethan Martin comes in sixth on BP’s list, compared to third and eighth place finishes on the other lists.

The Teenager Gets His Due

Carlos Tocci, who we featured at length in our piece about the Phillies and Venezuelan players, cracks the BP list at number nine. Tocci stands at 6’2″ and 160 lbs soaking wet but covers all the field you could ask for in center field. Tocci hit .278/.330/.299 in his age 16 season last year for the Gulf Coast Phillies. He will likely start the year in Williamsport but could easily jump, as a 17-year old, to Lakewood with a good Spring Training.

Tommy Joseph was ranked a solid fifth by BP and seems to be gaining traction in the “could be a solid, every day player” department. Slightly disappointing considering the haul that was given to acquire Pence.

Much like the other lists, Sebastian Valle again does not appear in the Top 10 after years of being recognized among the Phillies’ top positional prospects. 2011′s number one pick, outfielder Larry Greene was left off of the Top 10. The same applies for RHPs Julio Rodriguez, RHP Seth Rosin, and RHP Brody Colvin and OFs Tyson Gillies, Aaron Altherr, Leandro Castro, and Jiwan James,