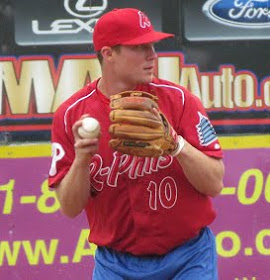 Law thinks Asche could make an impact with the Phils in 2013. Photo by: Jay Floyd

In an Insider Only post, ESPN’s Keith Law ranked third baseman and non-roster invite to Spring Training Cody Asche as an honorable mention among the prospects who could have the biggest impact in 2013. The list is measured by expected roles, playing time, and situations of players that may be in front of them. In previous pieces, Law has cited the Phillies lack of depth at third and Michael Young‘s age as reasons Asche could see time in 2013. Baseball Prospectus loves Asche’s ability to hit for contact while John Sickles thinks he is not far away from contributing. In our non-roster preview, I gave Asche a C+ chance of seeing time with the Phillies in 2013, which roughly translates into a 60% shot, qualifying his time as a September call-up.

Look for Asche, who was selected by the Phillies in the 4th round of the 2011 draft, to join the PhilliesNation team beginning next week, as the 22-year-old will provide weekly interview/diary entries directly from spring training.