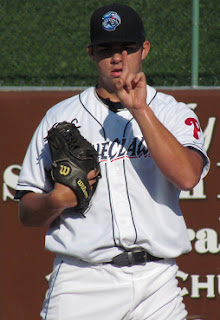 Left-handed pitching prospect Jesse Biddle redefines homegrown talent. Born and bred as a Phillies fan in the Philadelphia region, Biddle’s childhood dreams came true in 2010, when he was selected 27th overall in that year’s amateur draft by the Phils. Since then, he’s been a steadily rising prospect and on an ascent toward the highest levels of the game.

Upon signing his first pro contract, Biddle quickly made his minor league debut, beginning his journey toward donning the home uniform of the team he cheered on from the seats of Citizens Bank Park all throughout his teenage years. The graduate of Germantown Friends School in Philadelphia combined to sport a 4-1 record with a 3.92 ERA and a .241 batting average against in 12 starts with the rookie level Gulf Coast League Phillies and the short-season Class A Williamsport Crosscutters in 2010.

The following year, Biddle became an All-Star in the Class A South Atlantic League as a member of the Lakewood BlueClaws. As the team’s most dependable starter through much of the season, Biddle posted a 7-8 record with a 2.98 ERA in 25 games (24 starts) and notched 124 strike outs in 133 innings pitched. In addition, he held opponents to a .219 batting average.

As evidenced by his April stats from the past two seasons, Biddle is a slow starter. In 2011, he put together a 0-4 record along with a 5.91 ERA through his initial five starts. His 2012 campaign began with a 0-2 record and a 5.71 ERA through four starts.The six-foot-four 225-pounder always shows improvement as the season goes on, however, as he tallied a 2.61 ERA in three Class-A short-season starts after his August, 2010 promotion from the GCL. He also wrapped up his 2011 campaign with a stellar stretch in which he tallied a 1.91 ERA over his final 12 outings. Additionally, Biddle sported a 2.87 ERA following his troublesome April last year.

Confident in his own abilities and control, Biddle maintains a firm focus on the tasks at hand, even on off days. There is not a day that passes, during the season, in which Biddle hasn’t done homework in some fashion to learn a bit more about the game of baseball. Biddle also has a great frame of mind and realizes that achievements and promotions won’t be handed to him and that he has considerable amounts of work ahead at all times.

Where Biddle has shown the most progress is with his change up, which he has built confidence in to throw in any count.  His repertoire also includes a four-seam fastball that typically clocks in the 91-92 MPH range, but can reach higher, and a very strong curveball.

Described by Clearwater manager Chris Truby, who has managed the Philadelphia native at three levels of the minor leagues, as ultra-competitive, Biddle sports an easy, over-the-top delivery.

The 21-year-old spent his off-season working hard to prepare for his expected assignment at Double-A Reading this year.  Having spent time working on cardio and weights up to four times a week in addition to his throwing program, Biddle is highly excited for the opportunity to be able to pitch close to home this year against Eastern League competition.

The timing for Biddle’s rise to the big leagues may coincide perfectly with the expiration of ace hurler Roy Halladay‘s contract.  Look for a possible 2014 big league debut for this youngster.