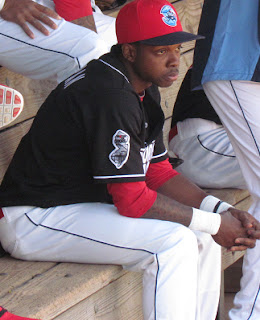 Following a day in which he committed three errors in an 11-4 loss to Kannapolis at Lakewood’s FirstEnergy Park, highly regarded Phillies prospect Roman Quinn seemed to be pondering a change of position in order to help his career, his team and his own peace of mind.

Quinn’s three errors on Sunday for the Class A Lakewood BlueClaws, gave the speedster, who is generously listed five-foot-ten 170-pounds, a total of five miscues on the new season. Having spent more time in the outfield during his high school days, Quinn switched to shortstop on a full time basis upon signing his first professional contract with the Phillies late in the summer of 2011, after the organization selected him in the 2nd round of that year’s amateur draft.

Asked on Sunday if he can take a lesson from his dismal defensive effort, in order to bounce back the next time out, a clearly discouraged Quinn, who knows that baseball is a game full of failures, assuredly stated he had no choice in the matter, but admitted that he has been having a difficult time in a position that still feels new to him.

“I can’t do nothing but bounce back tomorrow,” Quinn said from his locker after Sunday’s series finale that put the BlueClaws’ record at 1-3 this year.  “I think most of (the defensive troubles) got to do with the mental part of it. I’m not too focused on the game when I’m playing shortstop. Something I just got to adjust to.”

A bit of doubt enters Quinn’s typically confident articulation when he speaks about how far along his comfort level should be after manning shortstop for a full season last year with short-season Class A Williamsport. Ranked by PhilliesNation.com as the Phillies’ #8 prospect and as high as #2 by a national publication, Quinn feels that the shortstop position should be coming easier to him by now.

Experiencing some success on the offensive side of the ball, having collected six hits, five of which did not see the batted ball leave the infield, in 18 at bats (.333 average) with a double and three stolen bases through four games with the BlueClaws, Quinn struggled to put a positive spin on the performance he’s had at the plate thus far, crediting a higher power for his good fortune.

“I’ve just been putting the ball in the right spots. Thank God I’m fast. I’m still not comfortable from the left side, but I’m getting there,” the Port St. Joe, FL native, who is still developing his switch-hitting abilities, stated.

The request to develop his switch-hitting abilities, along with the aforementioned positional adjustment, were changes that the Phillies thoughts could make Quinn a better rounded and more valuable talent.

Citing the youngster as an inning changer and praising his abilities to create havoc on the bases and disrupt a pitcher with his presence, Lakewood manager Mickey Morandini declared that Quinn’s offensive production is very promising, despite his defensive shortcomings.

At this stage, it’s certainly in the Phillies’ plans for Quinn to be an everyday player. It just seems that perhaps his contentment and the BlueClaws’ defensive integrity might be better kept unscathed, going forward, if the organization delves into the idea of moving Quinn out of the infield and back to a position of increased comfort.

OF Kelly Dugan is on the seven-day disabled list due to an oblique issue.  The Phils’ 2nd round draft pick from 2009 expects to be activated for the  Class A Advanced Clearwater Threshers when they return from their road trip on Monday, April 15th.

3B Mitch Walding has gone 6-for-11 (.545 avg) with five walks, a double and four RBI through four games with Lakewood this season.  The 20-year-old was the Phillies’ 5th round draft pick in 2011. Walding’s high school teammate Jake Cose threw five scoreless frames for Kannapolis and earned the win against Lakewood on Sunday.  Walding singled and walked in two plate appearances against his St. Mary’s HS (California) classmate.