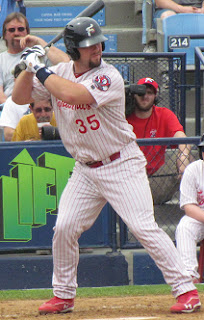 In an organization stocked with catching talent, Cameron Rupp has, at times, been an afterthought.  That isn’t the case any longer, as the Phils’ 3rd round draft choice from 2010 has forced the team’s brass and scouts alike to take notice and hold him in consideration as a potential big league backstop candidate.

While Rupp’s numbers (.215 avg, two home runs, six RBI through 18 games) aren’t overly impressive thus far this season, it’s the overall effort, defensive skills and numbers from previous seasons that have the projected ceiling for the University of Texas product on the rise.

Rupp’s manager, Dusty Wathan, who had a 14-year playing career as a catcher, sees a great amount of potential in the six-foot-two 230-pounder and thinks that his future is bright, comparing him to the Phils’ current big league All-Star at the same position.

“Carlos Ruiz came here eight or nine years ago and wasn’t very touted and look where he is now.  He has been a big contributor and to the World Series. I just think, hopefully, Cameron Rupp can be in that same mold. A guy that wasn’t really touted, wasn’t really a big prospect and, you know, has just worked hard and put himself on the map,” Wathan asserted.

Ruiz, a .274 career hitter in eight big league season, has the starting job as the Phillies’ catcher locked down currently, but is slated to become a free agent following this season, which would open the door for one of the organization’s prospects.

When Ruiz came up through the Phillies’ minor league ranks, he was rarely held in high regard as a potential future big league star. The man who became a World Series champion and represented the Phils in last year’s midsummer classic entered his age 25 season with Double-A Reading, in 2004, as a .250 career hitter with 14 home runs and 111 RBI in four professional seasons.

Rupp, who seems to be ahead of the Ruiz minor league curve, entered the 2013 season in Reading as a career .258 hitter with 19 homers and 121 RBI in three professional seasons and, at 24-years-old, Rupp is younger than when the Panamanian born backstop began a season at the Double-A level.

The righty hitting Rupp isn’t focused specifically on being the next Carlos Ruiz.  He did, however, absorb a lot from Ruiz during a rehab stop that the now 34-year-old veteran made with Reading last week.

“You watch and you learn. I thought it was really cool, these games, they don’t mean a whole lot to him, but he came in there as if they did. He took the losses as tough as we did,” Rupp explained.

“He came out, had fun with us and I could pick his brain and I learned a little bit about what he sees, when he sees it and it was a really cool experience.”

After the Phillies added Tommy Joseph, who was acquired from San Francisco in last year’s Hunter Pence trade, to their already well stocked collection of catching talent, Rupp’s status in the system may have seemed to suffer a setback.  Joseph, who is 34 months younger than Rupp, was rated as a top ten Giants prospect prior to being dealt and is now among many national outlets’ top five Phillies prospects.  Joseph (.214 avg, three HR, 14 RBI, 19 games),  is the starting catcher with Triple-A Lehigh Valley.  He joined Mexican slugger Sebastian Valle, who is 22 month younger than Rupp and has also been a very well regarded catching talent all throughout his career, in the Phils system.  Valle (.155 avg, two HR, six RBI, 18 games) currently splits the catching duties at Reading with Rupp.

Despite what additions the Phillies make and aside from what the other players might be doing, it’s Rupp’s focus on his own game and his pitching staff that helps him excel.

“I can’t really control the moves and things that (the Phillies) make. I can only control what I do out on the field. So, I come out every day, willing to work hard and give everything I’ve got that day. I’ve taken catching- defensively, I’ve learned so much more about the game in previous years. I’ve gotten the trust of most of these pitchers that I’ve worked with over the past few years and some of the new guys, I hope to gain their trust,” Rupp stated.

Rupp also credits Wathan, whose father John Wathan is a former player and manager in the big leagues, with helping him develop behind the dish.  Dusty, who reached the big leagues with Kansas City, is the first manager that Rupp has ever played for that has been a catcher at the highest levels of the game.

“It’s nice to be able to ask questions and have a guy that’s been in your shoes and been in the same situations and knows and understands the game,” Rupp said.  “And I know (Dusty’s) dad was a manager in the big leagues for a long time and, you know, he’s got a lot of background. He knows the game in and out and it’s helpful for us. We can get a lot of insight calling pitches, situations in the game, when to do things, when not to and it’s very helpful.”

Rupp had a quick glimpse of the pinnacle of the sport, where Ruiz has enjoyed considerable success, and where Wathan battled for years to simply have a proverbial cup of coffee, as Rupp was in major league spring training with the Phillies this year.  The small sample of the bigs is something that has left the Plano, TX native thirsty for more.  And while his own future may depend on the paths of a few other players, Rupp’s objective is clear.

“Getting sent back down to minor league camp was an eye opening experience, just from what it’s like up there, but it absolutely makes you want work twice as hard or harder just to get back up there.  That’s the goal.”