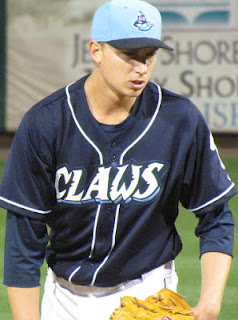 Right-handed hurler Nicholas Hanson was selected by the Phillies in the 16th round of last year’s draft.  The Golden West College product had a tough pro debut with the short-season Williamsport Crosscutters, where he sported a 2-3 record with a 7.00 ERA while averaging 5.8 K/9.  This year is a completely different story, however.  In nine outings, Hanson, 21, has tallied a 1-0 record along with a 2.94 ERA and a 7.48 K/9 mark.  Additionally, in his three starts since moving from the bullpen, the 6-foot-7, 210 pounder has allowed just one run.

Recently, I had the opportunity to chat with Nic and he spoke about his success, his best friend who is also a player, his offerings on the mound and plenty more. Read ahead for that full interview.

– You’re on a hot streak now and doing very well as a starter after relieving to start the season.  What can you tell me about your early success this season?

– You mentioned the new addition of a sinker.  Who initiated that?  How did that come about?

I used to throw it as a little kid.  It was the only way I knew how to throw a fastball, I’d kind of throw it differently than a regular two-seamer.  And I felt like I needed another pitch other than a four-season fastball.  My dad told me, toward the end of spring training, “Why don’t you throw that pitch?”  So, I threw it the last start of spring training and it worked well.  So, I figured I might as well stick with it and I’ve been throwing it out here.  It’s been getting better every time, so I’m happy with it.

– If I were to ask you to scout yourself, what would you say?

I would say 6-foot-7, strike thrower, good plane when he gets on top, good sinker, slider is the our pitch and the change up’s getting there.  It’s developing, but it can be good at times.

– We talked about you changing roles a bit.  Do you have a preference for where you pitch?

I mean, I think most people like to start, but as long as I’m playing baseball, I have fun.  Bullpen, starting, whatever, I have fun.  I’d like to keep going as a starter.  I like knowing when I am going to pitch and getting an opportunity to pitch an extended amount of innings, get in a groove and get the feel for it.

– The draft last year…what was that experience like for you?

It was a little bit of a stressful day for a lot of people.  I didn’t go where I thought I was gonna go, but went (as) the Phillies’ first pick on the third day.  It was a happy time.  Family was stoked, friends were stoked.  I got an opportunity and wanted to go with it.

– You spent last season with Williamsport after being drafted.  How do you feel your time in Williamsport went and how was your first exposure to pro ball?

It was a learning experience, definitely.  I didn’t really know what to expect, coming from junior college, you know.  It was kind of different facing these guys that you see on ESPNU and all these big time prospects and stuff.  But, it was just a big learning experience getting used to the pro baseball way, how to compete and just confidence and all that.

– I know you’re a California guy.  Who did you look up to as a player before turning pro?

– As a pro now, if you had the opportunity to speak to young players that were hoping to play baseball being high school, whether it’s college or professionally, what advice would you give?

Stick with it.  Never give up.  I didn’t play baseball my junior year, I was out of the game.  Just kind of didn’t know what I was going to do and I got back in the game.  I would just tell them never give up.  Always keep going.  Work hard and stay positive.

– It seems you’ve got a connection in the pro ranks that may have had some impact on bringing you back to the game in those high school years.  You know, a close friend named Henry Owens, who is a Red Sox prospect.  Just talk about that a little bit.

Yeah, I grew up with Henry.  Actually, he lives in my neighborhood, right behind me.  We grew up together, playing baseball together, always been good friends.  And once he got drafted, in 2011 and I got drafted last draft, so we lived together in the off-season.  We just worked out together, talked the game together and he had a full season ahead of me and he kind of gave me some pointers and let me know what to expect and stuff and it’s been beneficial, definitely.

I guess, well, right now, being in Single A, it’s kind of just communicating with the teammates in the off-season and seeing how other guys are doing.  I guess down the road, being in the big leagues and stuff it can help you be a fan favorite.