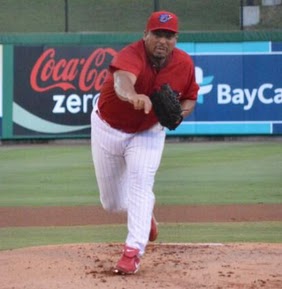 Carlos Zambrano continues to try to reestablish himself as an impact pitcher and made his first official minor league appearance for the Phillies on Tuesday.  In 4 1/3 innings, Zambrano threw 81 pitches while allowing no runs on three hits for the Class A Advanced Clearwater Threshers.  The former Cubs and Marlins pitcher also struck out two and walked two en route to a no decision.

Zambrano did not exhibit any of the traits that have made him one of Major League Baseball’s most notorious characters (examples here and here).  In fact, according the Threshers catcher Logan Moore, who spoke exclusively with PhoulBallz.com following the team’s 3-0 win over Brevard County on Tuesday, Zambrano was a pleasure to deal with.

“It was a real cool experience,” Moore stated.  “He basically told me to call whatever (pitches) I wanted because I knew the hitters and he just threw what I called.”

Moore, the Phillies’ 9th round pick in 2011 out of Northeastern Junior College in Colorado, declared that pitching to Zambrano wasn’t a great variance from his normal efforts as battery mate to young prospects, and added that the three-time big league All-Star put him at ease.

“I wouldn’t say it’s much different than a normal game catching a guy like that. He made me feel comfortable working with him, so it made it pretty easy on me. He was easy to be on the same page with and that’s how it should be with our starters and him,” Moore said.

Prior to his outing on Tuesday, Zambrano, who signed a minor league contact with the Phillies on May 15th, had appeared in two games with the club’s extended spring training team.

In an effort to build stamina, the Phils are hoping to keep Zambrano on a starter’s schedule, throwing every five days.  With the next turn coming on Sunday, the Phillies have plenty of options for their newest rotation hopeful’s weekend.  The Threshers play in nearby Dunedin on Sunday, while the Class A Lakewood BlueClaws, Double-A Reading Fightins and the Triple-A Lehigh Valley IronPigs all have home contests that day.

Zambrano’s contract reportedly includes an out for the veteran, who could request his release from the organization if he isn’t in the majors by July 1st.