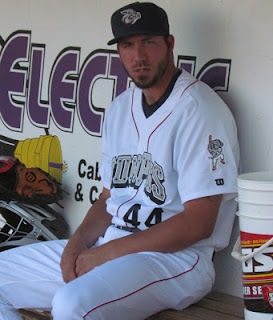 The Phillies saw enough of their dismal middle relief and began making adjustments to that portion of their roster back on May 22nd, sending imposing right-hander Phillippe Aumont down to the minor leagues after a shaky stretch to open the season.  Since the demotion, Aumont has continued to have control issues and has looked troubled through five contests.

Selected in the 1st round by Seattle in the 2007 draft, Aumont was later traded to the Phillies, along with Tyson Gillies and J.C. Ramirez, in the December, 2009 deal for Cliff Lee.  This year, Aumont opened the season on the same roster as Lee, with the Phillies, but while Lee steadily performs like an All-Star, the 6-foot-7, 260-pounder lacked command and the team took notice.

Following his two outings on May 18th against Cincinnati and May 20th against Miami, in which he allowed three earned runs in one total inning, Aumont’s ERA spiked from 2.25 to 4.15 and he lost his spot on the Phils’ big league roster.

On the bright side, the 24-year-old Aumont didn’t walk anyone in those two outings, or the one before them, after issuing 10 free passes in his first 12 innings this season.  However, with more pitches in the strike zone came greater damage from the opposition, as he surrendered five hits to eight batters faced.

“It was a walk an inning and, you know, and that frustrated me a little bit, so I started working on it…and I started throwing more strikes and strikes came along, but then hits came along too,” Aumont explained.  “I wasn’t executing the fastball inside, the curve ball below the zone.  Everything was in the strike zone.  And that’s where I got hurt and they saw that.  They told me I was making progress, but I just didn’t have what it takes, right now, for me to be up there.”

The Phillies, who were 1-15 in games in which Aumont appeared this season, wanted the Quebec, Canada native to focus on short goals and target a pitch by pitch approach to maximize his control.  Aumont feels he could have done that in the majors, without being demoted.

“I did (feel like I could have worked this out up there).  I really didn’t see it coming.  I thought I was making progress.” Aumont stated.  “The big work is on me.  Do I believe and am I confident enough to get up there and stay up there and I think that’s my job, to fulfill that duty and to just stay up there and make sure I stay confident and healthy and fresh and I stay on top of my game and not let an outing or two or an event just take that away from there.”

The work, as Aumont describes it, is not getting done, even after he’s been reassigned to the minors.  Despite working closely with Lehigh Valley pitching coach and former big league pitcher Ray Burris to keep his head moving on target when he throws, in his time with the IronPigs, Aumont has walked 10 batters while allowing four earned runs in 3 2/3 innings.   At that rate, it could be a long while before Phillies fans see Aumont sporting red pinstripes again.  His mentality remains unscathed, however.

“There’s no time frame (for a return) in mind.  I’m going to work with Ray and have fun with the guys for right now and get it together.  That’s my main goal…get it together and go out there and dominate.”