I spoke with Class A Lakewood manager Mickey Morandini on Friday about several of his players including 20-year-old shortstop Roman Quinn (2nd round pick, 2011), who was placed on the disabled list this week, 21-year-old OF Brian Pointer (28th round pick, 2010) who is hitting at a .325/.400/.500 clip in his last 10 games, and 20-year-old RHP Severino Gonzalez, who joined the BlueClaws’ starting rotation this week after posting excellent stats (1-1 record, 1.65 ERA, 33 K, 3 BB in 27 1/3 IP) with Class A Advanced Clearwater, plus plenty more. 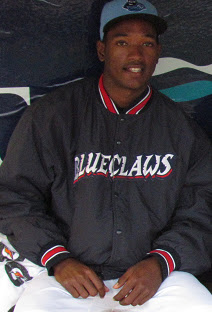 Most importantly, Morandini confirmed that Lakewood’s lone lefty hurler, Yoel Mecias, who represented the ‘Claws in last week’s South Atlantic League All-Star Game, is facing Tommy John surgery.  Mecias struck out eight batters over 3 2/3 innings in his most recent outing against West Virginia last Saturday, but left the contest after experiencing elbow pain.  An MRI conducted on Thursday revealed damage to the ulnar collateral ligament and reconstructive surgery is required for the 19-year-old Venezuelan.

Read ahead for more from Morandini…

– Roman Quinn really put things together and had picked up his offense here as of late. This week, he’s struck with a pitch in his left wrist and suffers a fracture, which results in a lengthy stretch of down time.  What are your thoughts on this situation for Roman?

It was a little disappointing.  He was making some strides, you know, getting his at bats in, making some strides with his throwing and his defense.  You know, I don’t think four-to-six weeks is going to set him back too much overall, but, for us it’s disappointing, you lose our lead-off guy, you know, your speed guy, you lose your shortstop, so we’re gonna need someone to step up and fill his shoes.  It’s just a hairline fracture, so it’s going to heal and he’ll be fine, so that’s good.

– Is Roman at home, healing, till the cast can come off?

He went to Florida.  He’ll rehab.  He’s gotta be in a cast for four about weeks and they’ll reevaluate him then.  Hopefully, the cast will come off and he can start doing some rehabilitation and strengthening on it and best case scenario, he’ll probably back in six weeks, hopefully, and if not, six weeks takes us to mid-August so, if he’s not back by then. he probably won’t be back at least for the regular season.

– And, clearly, he can play in instructs to make up for the time he’s missed here during the regular season, right?

He’ll play somewhere this (off-season), whether it’s instructs or some league somewhere, but they’re going to want him to go play some more some more, absolutely.

– You mentioned losing your lead-off guy.  A player that’s picked it up lately and earned a crack at the lead-off spot, while Quinn’s out, is Brian Pointer.  What can you tell me about his recent positive stretch?

I put Brian in the lead-off spot.  He’s been stealing bases for us, he draws some walks, he gets hit all the time, it seems like.  He’s got 15, 16 hit by pitches.  So, I just wanted someone at the top of the order I thought could get on base and make some things happen.  He’ll get the opportunity against right-handed pitchers.  I’d like to give (Carlos) Tocci some lead-off experience.  I’d like to give (Angelo) Mora some lead-off experience.  So, it’s going to rotate around, depending on the pitcher and how these guys are swinging.

– Young outfielder Carlos Tocci‘s been a guy that has seen improvements and has heated up as the weather has gotten gotten warmer.  What are your thoughts on his progress here with the team?

He’s coming along nicely.  He’s holding his own here.  We really didn’t know what we were going to get with a 17-year-old coming into this league.  We wanted to push him a little bit and see what he could do here.  His defense has been outstanding.  He’s playing a very good center field.  He’s throwing the ball very well.  And he’s starting to drive the ball a little more now.  You know, the ball’s going a little farther, he’s starting to get a little stronger.

My main concern is just trying to keep him fresh.  This is the first time he’s going to play this many games in a season, so I’m going to try and give him some days off in some day games and in certain match ups.  But, overall, we’ve been happy with the way he’s been playing. 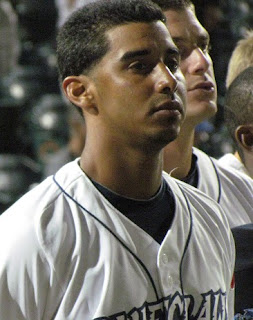 – Severino Gonzalez gets added to the roster here after putting up amazing numbers with Clearwater.  What went into the move to bring him here and what are your thoughts on him after throwing four scoreless frames in his BlueClaws debut this week.

I had never seen him pitch, so I was just getting the reports from the guys in Clearwater that he throws strikes, he throws four pitches, he’s not afraid to pitch inside, he’s got a good game plan, he likes to go right after the hitters, and that’s exactly what he did (on Thursday).  He’s got a good fastball.  He throws a cutter.  He’s got a good breaking ball, threw some change ups.  He mixed it up well.  He knows how to pitch.  Ain’t afraid to pitch inside and that’s exactly what he did (on Thursday).

The reason he came here is he was in the ‘pen in Clearwater and they wanted him to be a starter.  They wanted him to start getting stretched out and be a starter, so we had an opening, obviously, in the rotation, so it was a good fit for him to come here.  We’re gonna get his innings and and we’re going to continually stretch him out.  He was at about a 55 pitch limit in his first start here.  So, he was done at four innings no matter if the rain came, or not.  But, we’re going to continue to stretch him out and if he keeps pitching like he did (on Thursday), then he’ll be very successful.

– Mitch Walding began the season as one of this team’s most consistent hitters, but in the past couple months has seen things balance out and he’s seen some rough patches.  Thoughts on Mitch and his efforts of late?

Mitch is fine.  He started off real hot and then, yeah, he went into a little cool-down period there.  But the defense has been good.  The errors are up a little bit for him, but he plays very good defense.  He’s got great hands, good feet, some of his errors are just careless mistakes.  But, overall, we’ve been very happy with the way he’s been playing defense.  Offensively, he’s making strides, he really is.  He’s making strides, starting to pull the ball a little more, driving the ball a little more.  The strike outs are down.  The average probably isn’t where he thinks it should be, but I think for him to come in here and hit .260, .265, .270, I think that’d be a very good year for him.