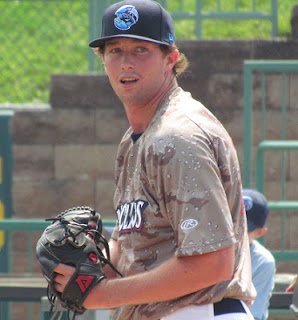 Right-handed pitcher Kevin Walter recently made his Class A debut after a considerable wait, having dealt with a lengthy recovery from Tommy John Surgery.  A Phillies’ 20th round draft selection out of Legacy High School in Colorado, back in 2010, Walter had been limited to very minimal game action over the three years after signing his first pro contract until he was promoted to Lakewood from extended spring training a couple weeks back.

In two starts since joining the BlueClaws the 21-year-old is 0-1 with a 4.00 ERA while striking out seven and walking five batters in nine innings pitched.

I recently spoke with the six-foot-five 215-pounder about his recovery, his admiration for other players, his pitch repertoire and plenty more.  Read ahead for my full interview with Kevin.

– What was your excitement level to finally get a call for a promotion an join the Class A BlueClaws roster?

It’s both excitement and relief.  It’s kind of getting back into real baseball.  It’s kind of- it wears you down, when you’re down in extended spring and it’s very monotonous.  So, it’s good to play in front of some people and play with a real team and play some real baseball.

– I know you got paired up with catcher Justin Dalles for your first start with Lakewood.  You two seemed to have a good rapport.  Had you two worked together before?

I was very pleased to hear that he’d be catching me here (for my debut).  I mean, Chace (Numata) is solid, but I’ve worked with Justin in extended, so we were on point together, it seems like.

– I noticed in your first start for Lakewood that the fastball was at 91 MPH in the 1st inning, at 90 MPH in the 2nd and then dipped below 90 the next two frames.  What are your thoughts on that and how did you feel out there?

I felt great.  I kind of think I was getting too delicate, I would say…I was trying to be a little too precise and Justin came out in the 3rd and said, “What are you doing?  Just throw the ball!”  And that kind of helped me out a little bit.   First time being out in a stadium with fans in quite a while, so I just needed to get out there and throw.

– What’s your full repertoire out there right now?

– Your curve ball looks to have good movement and fools your opponents.  Talk about that a bit.

My curve ball has good break, but it is a little bit harder to control sometimes, and I felt my change up was a little more control-able (in my first outing).

– What are your thoughts on Lakewood thus far?

I love it here so far.  The stadium’s beautiful.  The fans…even on an 11 o’clock start, with all the kids out here and stuff, it was real cool.

– Regarding your situation when you missed time and required surgery…take me through that.  What can you tell me about what took place and how you progressed?

So, it was my first spring training in 2011, I started feeling that elbow pain.  I tried to rehab and tried to go the non-surgical route, didn’t quite work, ended up having the surgery the end of ’11.  I rehabbed all last year, got some innings.  I think about 12, 15 innings maybe, between the end of GCL and instructional league and pretty much came out, feeling pretty good in spring training and it’s felt good since.

– Through all of that, how discouraging is it to be sidelined, out of action, and not be able to fully charge into your professional career?

I’d be lying to you, if I said it wasn’t discouraging.  It is.  But, I mean, now that I’m back, now that I’m playing in games, we can start building things up and really making big strides.

– Who was the biggest help to you during all the down time?

– Coming up as a teen what other positions did you play and when did you take exclusively to pitching?.

– Were the Phillies among teams that were scouting you a lot in those days, or was it a bit of a surprise when they took you in the 2010 draft?

I had briefly spoken with some of the Phillies guys in high school as far as scouting and stuff.  I filled out a questionnaire and all that sort of standard protocol, but I hadn’t talked to them directly before the draft and I was kind of surprised when they picked me.  Kind of didn’t think it was going to happen, but I was pleased and it’s a great organization and a great city, obviously, I mean it would be pretty unbelievable to play in a big market like that.

I know I’m a little behind, as far as going through the surgery and stuff like that, but I’m pretty excited to get going.

– That’s pretty cool.  A lot of guys at the lower levels stay reserved and wouldn’t admit if they are looking beyond the level they’re at and they won’t say they’re thinking about what’s four levels ahead.

This is the beginning of a very long process, but you see these guys, especially when I was down in rehab, like (Roy) Halladay just came in and they’re normal guys.  You see the guys that used to play in Lakewood.  It’s not too-too far- I mean, it’s very far for me- but we’re really, we’re all baseball guys.  We’re all pitchers.  All of us relate to each other, so it’s cool to see the guys like (Justin) De Fratus and (Jake) Diekman, guys that I’ve played with instructional league a little bit.  (Vance) Worley, all those guys are fun to watch because they were here not too long ago.

– And you gestured here to this wall beside us, it’s a wall (leading into the BlueClaws’ clubhouse) full of framed pictures of guys that went “from the shore to the show”, as they say.  Players that made it to the big leagues after playing on this Lakewood roster.  When new guys come in here, such as yourself, how impressed are you by something like this?

I don’t know if anyone else does, but I was.  It’s fun to see the guys that you know.  The ones you’ve spoken to, had conversations with.  (Mike) Stutes, (Lendy) Castillo, I mean these guys were just here a couple years ago!  It’s not a long time.  It’s definitely fun to- and even the older names.  Even ’01, ’02.  It’s kind of fun to see Ryan Howard‘s picture up here.

– Absolutely.  Now lastly, what players did you look up to most prior to becoming a pro?

As far as pitchers, I always looked up to Jon Lester, just, you know, the type of guy that overcame a lot of adversity with his cancer and even though he’s a left-handed guy, I like to look at his mechanics, kind of how he does things, how he approaches hitters.  I always enjoyed watching him.  I still enjoy watching guys like Josh Johnson, Matt Cain, kind of the same build, the same sort of pitchers that I would like to emulate and relate to.