I sat down with Double-A Reading manager Dusty Wathan on Thursday to chat about several key names in the Phillies’ developmental ranks.  Among the topics of discussion were top Phils prospect lefty pitcher Jesse Biddle, fast rising third base prospect Maikel Franco, struggling left-handed starter Austin Wright and outfielder Tyson Gillies, who earned a promotion from Reading to Triple-A Lehigh Valley this week.

Read ahead for all the quotes, plus some bonus Fightins related news blurbs at the end… 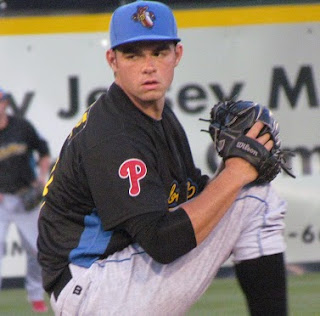 – Lefty pitcher Jesse Biddle has now gone eight straight starts without a win.  As good as Jesse is, can this sort of stretch be disruptive or discouraging for a young player?

Well, I think a lot of times, every year you can look and see one guy who pitches well and doesn’t get the wins to show for how well he’s pitched.  And a lot of it comes down to run support.  It’s a difficult situation sometimes, but it’s just, every year it seems like one of the guys in the rotation has trouble getting runs scored for him and Jesse seems to be that guy this year.  He’s a guy- obviously, he’s a huge competitor who wants to win, but in the long run, as long as he’s making improvements every start and getting himself better as we go…the wins are always nice as a ball club, but I tell these guys that if we don’t win any games and everybody gets better, then we’ve done our job.

– Maikel Franco‘s joined the club here and has had some really good success, batting .407 in 14 games with four homers.  Clearly, he’s taken some big strides.  I wanted to ask if you saw him in spring training to remark about the difference between then and now and just your thoughts on his progress.


Yeah, I didn’t really get a change to see him a whole lot in spring.  A couple games, but nothing over an extended period of time.  I saw him play in instructional league a couple years ago and, obviously, he’s a kid that’s developed into a pretty good pure hitter, I think.  He’s got some power, obviously.  But, I think the thing you see in him is that he goes up there and young hitters a lot of times they’ll have a tendency to go up there and chase pitch after pitch out of the zone or make the same mistake twice.  He doesn’t tend to do that.  He’ll make the adjustment in the middle of his at bat.  They might throw him a breaking ball in the dirt and then the next thing you know they try to throw him another one and he lays off it.  He hasn’t walked a lot since he’s been here, but he’s been aggressive in the zone and that’s what we want guys to do.

– Austin Wright’s been a guy who has had some ups and downs this year.  He’s got a 6.95 ERA since returning from a DL stint in May, but he’s had some positive outings as well.  What are your thoughts on his year, so far?

Well, I think coming out of spring training, he had some shoulder stiffness and things, so we sent him back (to the Phillies’ spring training home in Clearwater).  I don’t think he was ever fully healthy when he got here.  I think he was trying to pitch through some stuff.  It didn’t work out, so we finally sent him back to Florida.  Since he’s come back, (Reading pitching coach Dave Lundquist) has done a good job with him, getting him back into his rhythm.  His speed in his wind up, I don’t know if you want to call it lackadaisical, he got a little slower in his wind up and that’s not the kind of guy he is.  He did some things with his mechanics over the winter.  I don’t think it really worked out for him.  Once we got him back here, and back with “Lundy”, who had him last year, I think he’s getting more comfortable with it.   Actually, the outing before last (eight innings, two runs, five strike outs, two walks against New Britain) was the best I’ve ever seen him pitch and Lundy said that was typical of what he saw last year.  Hopefully, he can build on that and continue on the rest of the year.

– Has there been any thought given to switching Wright’s role, either to give him a break from starting, like Brody Colvin has done in the past, or as a more permanent change?

I don’t think we’ve really talked about anything like that yet.  I think in the future, obviously, he’s got a plus fastball and a really good breaking ball and that could be an option for him down the road, but right now we think the best option for him is to go out and pitch every fifth day and have those days in between to work on his delivery and things. 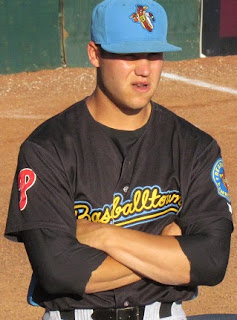 – Jay Johnson‘s been a guy that’s really helped the team out of the bullpen this year, posting a 1.85 ERA since April.  He’s not a prospect that a lot of people talk about, but he’s really been a great contributor for you guys.

Yeah, he is.  He’s done a really good job.  He’s made some good adjustments.  Still needs to work on his breaking ball, being able to throw it for strikes and throwing it out of the zone and, I guess, just command it a little bit better.  He’s got a plus fastball, especially from where his arm slot is.  He’s been very tough on left-handers and he’s done a nice job of coming in and stranding guys.  We’ve been starting to use him in more of a role of pitching in more games and less innings, a situation where he could develop into a situational lefty.  He’s done a nice job getting some right-handers out this year also, but for the most part, he’s done a nice job of coming in when we needed to get some lefties.

He’s a guy that seems to get stronger the more he pitches.  Day after day and doesn’t have a whole lot of rest in between, maybe not the huge reps daily, but in short reps his velocity goes up at times.

– Tyson Gillies earned a promotion this week, getting back up to Triple-A after some struggles this year.  Reports were that he was adjusting his mechanics at the plate and things.  What can you tell me about Tyson’s progress?

I think, yeah, it was a tough thing.  You have some success in years past and they want to change you and sometimes it’s difficult for players to realize, you know, the success they’re having at that level isn’t where we ultimately want them to have success.  Ultimately, we’re trying to get them to have success at the major league level.  I think as a collective group, as an organization, people thought that Tyson could be a better hitter than what we’ve seen in the past and we wanted to make some adjustments.  And it’s tough for a young player to say, “Well, I’ve had success doing this.  Why can’t I just keep doing it?”  And I think he’s kind of finally bought in and he’s feeling comfortable with his swing and he’s made some adjustments with his swing.  He’s made some more loads, more movements in his swing.  He’s not so stiff.  He’s starting to have some success here, especially the last couple weeks he was here, which is a testament to him.  He’s worked hard and it’s starting to pay off in the numbers.  It was starting to pay off prior to the numbers getting better.  I think just in his at bats- internally, the way we keep our stats, and how he was progressing I think it was very nice.  And to his credit he worked his butt off and got himself back to Triple-A and so far so good up there.

– Jiwan James is on the road back from left knee surgery.  I heard from him and he was stating that his rehab stint with the Gulf Coast League team might be a bit long because he missed spring training and needs to make up for those at bats he missed.  Is there any time frame for getting him activated up here with Reading?

No, not right now.  I think he’s in a situation where, like you said, he didn’t really have a spring training.  He tried to play through a bunch of stuff in spring training before he decided that he needed the surgery.  Right now, I think it’s important for him to get at bats, where ever those may come  Just get him out there, get him on the field, get him feeling good.  You know, hopefully, at some point this year he and the training staff and everybody that sees him down in Florida deems him ready to come up here and contribute to this club.

More Reading notes-
Phils outfield prospect Kelly Dugan, who was the organization’s top draft pick in 2009, when he was selected in the 2nd round, announced on his Twitter account late Thursday night that he had been promoted to Reading.  With Class A Advanced Clearwater this year, Dugan sported a .318 batting average with 10 HR and 36 RBI in 56 games.

Third base prospect Maikel Franco was out of action on Thursday as he jammed a finger or two on his right hand, diving into a base on Wednesday.  Franco was confident that the issue would not be a lasting problem and that icing the swollen digits and a short bit of rest would be all the remedy he needed.