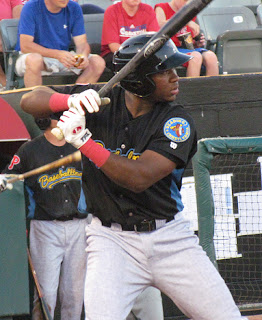 You likely won’t find a happier minor leaguer than Phillies third base prospect Maikel Franco. The Dominican born 20-year-old is having a tremendous season, has started to become a house hold name and will represent the Phils in Sunday’s MLB All-Star Futures Game.  With all that in mind, Franco’s ready to put forth his best efforts on a big stage but is still in amazement, at times, of his own output.

Signed by the Phillies in 2010 at the age of 17, Franco has steadily been climbing the developmental ladder ever since, making an impact last season with Class A Lakewood where he started off at somewhat of a slow pace.  The youngster batted .207 with six homers, 27 RBI and a .607 OPS before he turned things up after the South Atlantic League All-Star break. In the second half of 2012, Franco really showed what he can do, as he posted a .346 average with eight home runs, 57 RBI, and a .925 OPS.

Franco, who had never before played in cold weather, cites an adjustment period last year to playing in the northeast in April and May, where the weather is far different from the Dominican Republic and Florida where he had spent those months each year until his appointment to man the hot corner for the BlueClaws last season.

“That’s amazing.  I’m so happy.  Unbelievable.  But I’ve been consistent here.  I had 14 home runs and now I’ve got (more than) 20 already, I’m so excited and so happy,” Franco said with a proud expression.”

Overall in 84 combined games with Class A Advance Clearwater and Double-A Reading, the 6-foot-1 185-pounder has tallied a .321 average with a .958 OPS.

Of his progress and the recognition of playing in Sunday’s nationally televised prospect exhibition (ESPN2 at 2PM EST, live from New York’s Citi Field), Franco beams and can’t hold back a sizable grin across his youthful mug.

“I feel good. I feel excited because (I) play all the time and practice hard, so I want the fans and the coaches to think about good things for me,” Franco excitedly said. “So, I just play hard and it’s great if good things come for me.”

Franco is slated to serve as the designated hitter for the World Team, a slot he’ll gladly accept, despite taking great pride in his defense and feeling that’s an equal part of his skills set.

“I give a lot of focus on (that side of my game) because I need my defense too, because I play an important position- third base. I’m focused in, twice. I want to get help every way I can and get better (all around),” Franco stated.

Franco will be joined by Reading Fightins teammate Jesse Biddle, who is ranked as PhilliesNation’s top Phillies prospect for 2013.

Watson on the shelf…

Last season’s top draft selection by the Phils, Shane Watson, is slated to miss about a month, as he was placed on the disabled list this week with shoulder soreness. The 19-year-old righty had posted a 4-6 record along with a 4.75 ERA and a .230 batting average against in 16 starts for Lakewood this season prior to the injury.

Watson was slated to head to the Phillies’ spring training facility in Florida on Sunday to begin a rehab program.