From all throughout the Phillies’ developmental ranks, here’s our weekly rundown of top performers and those players that have struggled recently. 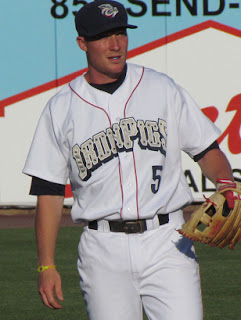 Third baseman Cody Asche had four multi-hit games over a five-game stretch last week, including a 5-for-5 effort against Pawtucket on Wednesday.  The 23-year-old International League All-Star is batting .288 with 10 homers and 56 RBI in 93 games this season.  Asche was the Phils’ 4th round draft choice in 2011.

The IronPigs’ other All-Star, second baseman Cesar Hernandez, is batting .333 with three doubles, a triple and five RBI in 13 contests this month.  Due to the Phillies’ void in center field, as Ben Revere suffered a broken foot over the weekend, Hernandez will not participate in the IL All-Star events, instead, he’s been assigned to Double-A Reading to get extra work in the outfield in case the Phils choose to call him up for the second half.  Hernandez has played six total games in the outfield as a pro.  The 23-year-old Venezuelan is batting .306 with 27 steals in 81 games at Triple-A this year.

First baseman/outfielder/DH Josh Fields is batting just .148 in 10 games this month.  The 30-year-old veteran is sporting a .306 overall average with four homers 33 RBI in 74 games this season with the IronPigs.  Fields was signed as a minor league free agent last November.

Lefty pitcher Tom Cochran didn’t make it through the first inning, in his latest start, allowing five earned runs in 2/3 of an innings against Syracuse on Saturday.  The 30-year-old is 3-5 with 5.62 ERA in 14 starts with Lehigh Valley this season.

Lefty reliever Jay Johnson is sporting a 1.88 ERA in 28 appearances since April.  The 23-year-old Canadian was signed as a minor league free agent by the Phillies in March of 2011 after he was drafted each of the previous two years and didn’t sign due to his failure to pass team physical examinations with the Orioles and Blue Jays.  Johnson is 1-2 with three saves and a 2.80 ERA in 36 games this year with Reading. 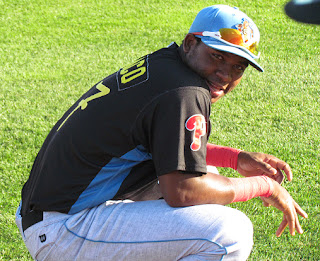 Third baseman Maikel Franco is batting .392 with five home runs and 15 RBI in 19 games since he was promoted to Reading from Class A Advanced Clearwater.  Franco went 0-for-2 in Sunday’s MLB All-Star Futures Game in New York and even struck out once when he faced his Reading teammate Jesse Biddle.

Jesse Biddle has not won in his last nine starts and has a 4.21 ERA over that stretch.  Despite that troublesome winless streak, the 21-year-old tossed 1 1/3 scoreless innings in Sunday’s Futures Game.  Overall this season, the Philadelphia native has a 3-9 record along with a 3.33 ERA and a .202 batting average against.  Biddle was the Phils’ first round draft selection in 2010.

Right-handed reliever Hector Neris has posted an ERA of 18.69 in four appearances this month, allowing nine earned runs in 4 1/3 innings.  Overall, the 24-year-old Dominican has a 3-4 record with a 5.37 ERA in 27 games (eight starts).

Third baseman Harold Martinez is batting .276 in 16 games since the Florida State League All-Star break.  The 23-year-old University of Miami product was the Phillies’ 2nd round draft pick in 2011.  The righty hitting Martinez sports a .227 average with one home run and 10 RBI in 50 games with the Threshers this year. 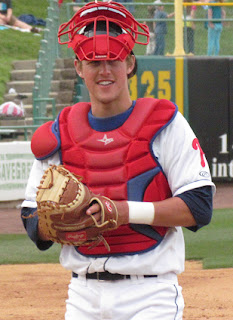 Outfielder Jonathan Roof is batting .394 with two homers and 12 RBI in nine games since being moved from Clearwater to Lakewood.  The 24-year-old played as high as Triple-A in the Padres system last year.  Roof batted .282 with three home runs and 18 RBI in 43 games earlier this season with Clearwater.

Outfielder Larry Greene Jr. has posted a .333 average with five doubles, a home run and three RBI in his last 10 games.  Greene, the Phillies’ top draft pick from 2011, is batting .231 with two homers and 21 RBI in 70 games this year.  The 20-year-old began this season in extended spring training.

Right-handed pitcher Severino Gonzalez is 3-0 with a 1.69 ERA in four starts since joining Lakewood’s rotation from the Clearwater bullpen.  The 20-year-old Panama native has struck out 64 batters while walking just six opponents in 48 2/3 combined innings at two levels this season.

First baseman Art Charles is 1-for-18 (.056 avg) in his last six games.  In 80 games, the 22-year-old has a .233 batting average with eight homers and 43 RBI.  The lefty hitting Charles was acquired from Toronto for Michael Schwimer during spring training this year. 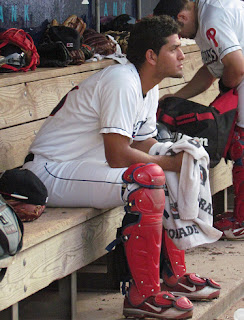 Outfielder Dylan Cozens is 6-for-33 (.182 avg) over his last nine games.  The 19-year-old was the Phils’ 2nd round draft choice last year out of Chaparral High School in Arizona.

This year’s first round pick J.P. Crawford is leading the GCL with a .395 batting average through the first 11 games of his pro career.  The lefty batting shortstop was taken 16th overall by the Phillies out of Lakewood High School in California.

Jose Pujols, a 17-year-old outfielder, sports a .163 average with one home run and three RBI in 13 games.  The Dominican native was signed by the Phillies last July and participated in the Florida Instructional League, following the minor league regular season.