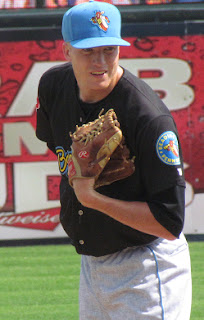 After a troublesome beginning (5.71 ERA in 10 games) to 2013 with Class-A Advanced Clearwater, righty reliever Mike Nesseth is having a strong campaign with Double-A Reading this year, posting a 1-1 record with three saves, a 1.96 ERA and a .204 batting average against. With teammate Kyle Simon sidelined with an injury, Nesseth, who stands 6-foot-5 and is listed as weighing 210 pounds, took over the closer role and has been very solid for the Fightins.

The Minnesota native was drafted in the 17th round in 2010, while already recovering from Tommy John surgery.  After a somewhat delayed start to his pro career, Nesseth entered this season with a 3.07 ERA in 53 professional games over three seasons.

I spoke with Mike recently about his change of roles within the bullpen, his boost in velocity, players he looked up to as a youngster and plenty more.  Read ahead for that full interview.

– Mike, you’ve landed in the closer role here for Reading recently.  What can you tell me about being the guy the coaches selected to take on that new spot in the ‘pen?

I don’t try to think of it as much of a closing role, obviously I’m pitching the late innings.  I’ll try not to think much of it, between the 7th, 8th and 9th (innings), you still want to do the same things.  Be aggressive, attack the strike zone, execute your pitches.  Obviously, in the 9th inning, depending on the situation, your lead, the batter that’s up, there’s a few scenarios you’ll pitch differently, but otherwise, that’s the only difference there is pitching in the 9th inning, I guess.  Otherwise, I’ll just stick to what I try to do and that’s attack the strike zone, throw strikes, get ahead and try not to walk guys and let them put the ball in play.

– The back innings roles are spots reserves for dependable guys.  Does that help your outlook when, clearly, the coaches have a lot of confidence in you to hand over key relief duties to you?

Yeah, it definitely gives me confidence that they feel that way.  It’s a very streaky, streaky game and just like hitters, pitchers; we’re gonna have our ups and downs.  We’re gonna have our hot streaks.  You know, we just hope our good streaks outweigh the low streaks.  Obviously, I think any of the guys in the bullpen at any time can do the type of things I’m doing.  It’s just, right now, that’s where I’m at.  It’s good to see that they have that confidence in me, so it does give me confidence.

– You had somewhat of a slow start to your career, as you dealt with injuries and a surgery.  Talk about going from that tough beginning to your pro career, dealing with that elbow injury to getting to where you are.

Yeah, it’s been- definitely, it was a slow start.  I knew in 2010 I wouldn’t even pick up a baseball until maybe late that fall and that was just to start throwing…and I would maybe face hitters in 2011, in spring.  So, it was a long process and I’m very young.  I mean, I’m not young, but I’m young in my professional career, like I haven’t pitched (much).  This is my second full season this year and a lot of guys are way past that, at least three, in their third full season.  So, I’m still learning stuff and it gave me a lot of confidence to know that after I’m all healthy, I can get back out there and get back to where I was pre-surgery.

– I know you’ve got a teammate, Colby Shreve, who went through Tommy John surgery during his draft year in 2008.  He was in need of surgery at the time of the draft, but he was still selected pretty high, in the 6th round.  Take me through the timeline for you.  Where did your surgery fall compared to the draft and were you selected where you thought you’d go?

My surgery was about six weeks before the draft.  That- I definitely wasn’t (drafted) where I expected to be or even where I wanted to be.  I wasn’t even close to that.  But, after the surgery I was just so happy to get a chance to play professional ball, you know, and not have to go out with an injury…where the success rate of that injury is pretty good if you have the right surgery and stuff.  So, I was really happy to get back out there and at least have a chance to play professional ball.

– I mentioned Shreve dealing with that same thing.  Was there any kind of communication between you two when you joined the Phillies to help you through your situation?

Yeah, I talked to him- I met him in my first spring training, actually, and that’s when I started to get to know him a little bit better and I talked to him about what he went through and stuff like that and now I’ve played with him for part of two years.  And I lived with him when I was down in Clearwater, so we’ve definitely gotten closer and, you know, we have a common theme to our professional careers, so I definitely learned some stuff from him and what he went through.

– Your fastball lately has clocked in the mid-90’s.  Last year, with Lakewood, I don’t recall you throwing as hard.  Have there been any changes to improve your velocity?  And what’s the repertoire right now?

You know, from when I was in Lakewood, I did- I increase it a little bit.  You know, when I went down to Clearwater after a little bit in Lakewood, I was consistently more 94/95.  For the most part, if you get the right rest, maybe if you get an extra day, or for some reason you get two days rest, you feel really good out there.  If you get a couple back-to-back days, you might feel a little tired out there.

It’s just fastball, slider, change up and it feels good.  My arm feels really strong right now.  It’s this time of the year, you’re kind of hitting your peak and you want to be able to ride your peak out and now have too many huge dips and peaks and valleys, I guess.

– I recall speaking with Jake Diekman a couple years back after noticing a similar spike in velocity from between when I saw him with Lakewood versus when I saw him again with Reading.  He described a change of arm angle helping the fastball speed.  Did you do something like that to get that boost in velocity?

Yeah, that definitely makes a difference.  In college, I dropped down my arm slot a lot and my velocity increased by, like, eight miles an hour, just because my shoulder was more free down there and I could get a lot more whip on it and action on it.  Then, when I signed- that was probably the reason I got injured, was part of my delivery, so we really changed it, moved it over the top, but now that I’ve played, I’ve kind of found my natural arm slot again, which is lower than when (the Phillies) changed it.  It’s more natural and that’s what they want.  They just want your natural arm slot and want you to feel good, feel free, so you’re not fighting through when you’re throwing a pitch.

– It’s possible that based on the output, your position in this Reading bullpen and your velocity perhaps it’s not too long before people start mentioning your name as a guy that is a potential contributor for that big league pitching staff.  What would that type of feedback mean to you?  And how do you feel about your potential for that?

I mean, obviously, I’d feel good about it.  It would just give me more confidence.  At the same time, I’m not gonna change anything.  I’m just gonna go out there and do the same stuff that I’m trying to do every outing and every pitch I’m out there.  It’s kind of a short stint right now, so, you know, I’ve just gotta be consistent with it and just keep doing what I’m doing and hope for the best and hope I, someday, can contribute up there.  Obviously, that’s the number one goal, is to get up there.  For me, to get in that bullpen and get into those late innings, that’s my number one goal.

– Last thing for you, what players did you most admire, growing up and what was appealing about them?

I was a big Randy Johnson guy when I was growing up.  I just liked his, just his attitude up there on the mound.  He was a big lanky guy, kind of like me.  He was lefty, obviously, but when I was in college I kind of just thought I was the right-handed version of him, just a little bit.  He really slung it in there and I would really drop down, side arm, low three-quarters, just like him but from the right side.  I also liked A.J. Burnett.  I kind of developed some of my mechanics from him too.  His deception, his delivery.  Those are two of the guys that I try to base my delivery off of a little bit, who I looked up to and wanted to have their careers too.