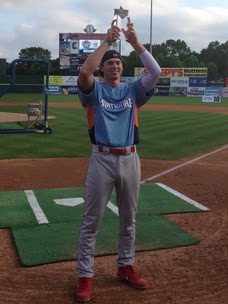 In the opening round, Green, the Phils’ 3rd round draft choice last year out of Jesuit High School in California, slammed three homers while tallying 290 points. The total was good enough to knock off six others, advancing the 19-year-old to the finals where he faced Lino, a catcher that was acquired last year from Baltimore in the Jim Thome deal.  The 20-year-old Venezuelan also had three home runs in the initial round while posting 240 points.

The pair of Crosscutters went homerless in the finals, but Green, the league’s leader in home runs (10) and total bases (101) edged Lino on points, by a margin of 170-100 to lock down the crown.

In the actual game, the American League affiliate All-Star team downed the National League club, which included the Tri-City ValleyCats (Astros) in order to keep the teams even at seven organizations each, in walk-off fashion.  After trailing 3-2 heading into the 9th inning, the American squad tied the contest on a lead-off homer by Ryan Huck (Oakland) and four batters later, with one down, Oscar Hernandez (Tampa Bay) grounded into a fielders choice, that couldn’t be turned for a double play, to plate the winning run and give the American League team a 4-3 victory.

Tyler Buckley, Williamsport’s 22-year-old righty reliever, recorded a scoreless frame, striking out one.  Starting outfielder Jiandido Tromp, 19, went 0-for-2, while Green and Lino, who entered the game as replacements, also were each hitless in two turns during the exhibition.

With the Crosscutters this season, the righty hitting Green sports a .267/.347/.529 line and has a .908 fielding percentage at the hot corner.