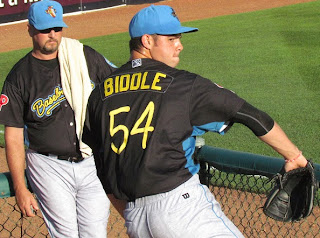 Over the weekend, I spoke with Double-A Reading Fightin Phillies pitching coach Dave Lundquist. A former big leaguer with the White Sox and Padres, “Lundy” has been coaching in the Phils system since 2008. The 40-year-old spoke openly about nearly his entire pitching staff including Jesse Biddle, David Buchanan, Mike Nesseth, Seth Rosin, Austin Wright and Brody Colvin.

Read ahead for that full interview…

– Jesse Biddle came out in Trenton over the weekend and had somewhat of a bounce back effort, following a pair of poor outings. He says it’s not a good result unless he wins, but overall it’s gotta be a positive step for him, right?

Absolutely. If you look at his last two outings, two-thirds of an inning and then an inning and a third, to come out (on Friday) night and really to have the command, much, much better than he’s had. The confidence level was much higher. The (velocity) was higher and he really showed the sharpest stuff he’s had in a long time. The win-loss to me really doesn’t matter. It’s that he’s out there throwing strikes, comfortable on the mound and aggressive like we saw him earlier in the year.

– David Buchanan has been consistent at times, he earns a promotion for a spot start at Triple-A Lehigh Valley. Just talk about David and his progress.

Yeah, he’s gonna go up there for a start. They had an opening and, you know, it fell in line with where he was throwing. He’s a guy that’s gonna throw strikes. Two-seam cutter, curve, change. You know, he’s been very consistent here. Give him an opportunity to go up there and see what he can do.

– So the plan is for David to get one start with the IronPigs, then he’ll be back?

As far as I know. It fell on a day when they had a few guys called up and they needed someone and it lined up with where he was and being a consistent guy that’s gonna go up and throw strikes, that was the move the organization decided to make.

– When there’s added attention from fans and media for a rehab appearance like Alex Rodriguez being on the Thunder against you guys, do you think that can have positive impact or result in good things for the guys here? 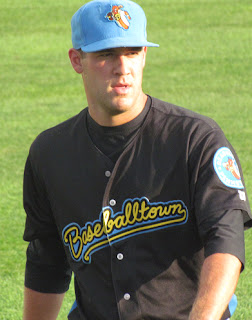 – I wanted to ask you about changes in roles, going from starter to the bullpen, for Austin Wright and Brody Colvin. The way it seems right now, Austin’s switch is seemingly a more permanent thing, while Brody’s move was more of a remedy or a fix, to get him right. Can I get some thoughts on those guys and their flips in roles?

With Colvin, a few ups and downs this year, command wise. Last year it worked, putting him into the bullpen, just to (give him) a little more element of surprise, coming into the games, where he doesn’t have four days to sit and think about it. Just to give him the ball and say, “Go!” But, his last few out of the bullpen have been good. He’s gone multiple four-plus innings and he’s done a real nice job, gotten himself back on track, so hopefully, we can just keep that going.

– This is half a joke here, maybe half serious…does Brody have Jesse’s poor outing to thank for the switch back to the starting role, as he helped eat up some innings there?

(Laughs) No, no not really. It fell where when Jess came out of the game, (Brody) filled in and was able to go four, four and a third…and you know, he took advantage of it. It was unfortunate for Jess to have those outings, but it got Brody the innings that he needed.

– I wanted to also ask you about Kyle Simon. He’s a guy that began the season as this team’s closer. Had great success last year, when he first came over to the Phillies in the Jim Thome trade and then this year he’s had some ups and down, more hiccups for sure this year than last year. Can you share some thoughts on Kyle Simon’s season?

Just consistency down in the zone. He’s always had the good sinker. We’ve done a lot of work on adding and developing a quality slider, which he’s put a lot of pressure- not pressure, but it’s a new pitch and he wants to throw it. But, really for him this year, it’s just been consistency down in the zone. He had a little bit of a some kind of aggravation in the triceps part of the elbow that held him up, but he should finish the season fine.

– Simon was sidelined for a bit, like you said, so Mike Nesseth slides into the closer role for some time. He’s really shown a lot of progress for Reading this year. Could he, next year, maybe be a De Fratus or a Diekman type that begins the season at Triple-A and is on deck when a vacancy opens up at the big league level?

I hope so. You know, coming up here, I wasn’t really sure- I knew he’d fit somewhere, but I wasn’t sure that he was going to embrace and take with that 8th/9th inning role, but the stuff, the sink, the power sink and the development, and consistency of his slider and change up have allowed him to pitch anywhere in these games. He’s gotten those innings and he’s taken off with it. He’s done a great job.

– There are some other relievers that you’ve probably had at multiple levels, guys like Colby Shreve‘s had some solid stretches and has pitched for you here and with Clearwater. Tyler Knigge was great at Clearwater last year and hasn’t been as sharp here, but has been fair. What are your thoughts on those guys and their futures?

Really, the rest of the bullpen’s gonna come down to consistency. There’s some power arms down there, but any time a power arm is up in the zone, it’s not gonna matter. If you’re underneath the ball or up in the zone, it doesn’t matter what level you’re at, you’re not gonna have a lot of success, so there’s some guys in there that are capable of doing some good things, but it’s gonna come down to the little things in their deliveries, staying on top of ball and driving it down to maximize their stuff. So, as long as those guys do those things, who knows? Sky’s the limit. 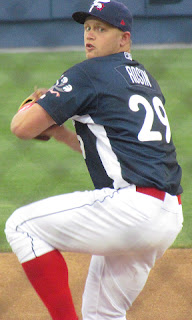 – Seth Rosin’s had a great year, an all-star season for him. Just thoughts on Seth’s year?

He’s done a hell of a job. Got good stuff, a strike thrower, has three solid-average major league pitches and potential for even more (velocity). Big, strong kid and I really can’t say enough about what he’s done.

– Mario Hollands was great at Clearwater this year, comes up to Reading has a rough outing. He was a guy last year that was super versatile. He started, he relieved, he pitched at four different levels of the system, what can you tell me about Hollands?

Mario’s a guy that has more (velocity) this year than he’s had the past couple years. Better command and there’s a lot of deception. That delivery- the cutter and slider combo really make him really tough against left-handed hitting. And to do what he did last year and do what he’s done this year, it shows him as a major asset to an organization. A guy that can go to any level, start or relieve at a moment’s notice and you know he’s going to throw strikes and get the job done.

– Are there any guys that have come through this roster this year or guys you’ve seen at other levels that you think have high ceilings?

Well, I mean, all the guys that were here that went to Triple-A. Any of those guys, they’re just a phone call away. Really any of them.

– I want to speak candidly and I don’t mean to insult anyone…but I feel like there might be guys like a Justin Friend that’s great at Double-A then maybe doesn’t do so hot at Triple-A. You mentioned it could be anybody that’s come through Reading and gone up, but maybe certain guys’ ceilings are Double-A. I don’t know if you’d agree or disagree…

Well, I mean if you want to talk about Friend with a low-90’s fastball, heavy sink and to me a guy like that, you never know. He could be a big league guy. There should be some big league time there for him. Somewhere. I think. Being around him, the kind of pitcher he is. So, again, it goes back to when you get to that level in Triple-A, if you get the job done, you should get the opportunity somewhere.