It’s another weekly rundown of the Phillies’ minor leagues.  Take a look at details on some recent noteworthy performers… 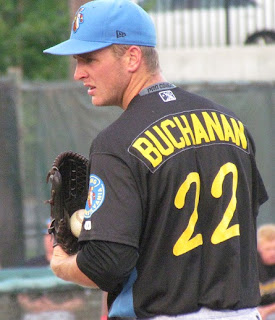 Right-hander David Buchanan got the call up on Sunday, and notched a win, throwing seven innings and allowing just two runs while striking out four and walking one.  Buchanan, the Phillies’ 7th round draft pick in 2010 out of Georgia State University, posted a 6-11 record along with a 4.82 ERA in 22 starts with Double-A Reading this year.  According to Reading coach Dave Lundquist, the initial plan was to have the 24-year-old make one start with the ‘Pigs, then return to Reading for his next start, but things can always change.

Tyler Henson, promoted from Reading when Cody Asche got the call to the big leagues, launched four home runs in his first four games with the IronPigs, after recording just four round trippers in 80 Double-A games this season.  Henson has a .368 average in six games with Lehigh Valley.  The 25-year-old infielder was signed as a minor league free agent last fall.

Third baseman Maikel Franco has gone 4-for-27 (.148 avg) over his last seven contests.  Prior to his current cold spell, the 20-year-old Dominican Republic native was batting .385 in 33 games for Reading.

Right-hander Seth Rosin lost for the first time in 10 starts this past week, allowing an earned run over five innings against Erie.  During that stretch, Rosin, who the Phillies acquired in the Hunter Pence to San Francisco trade last year, posted a 6-1 record and a 4.08 ERA.

Righty reliever Kenny Giles has posted a 1.50 ERA and an 11.25 K/9 mark in his last nine appearances for the Threshers.  The Phillies’ 7th round draft pick from 2011 is 1-0 with four saves and a 4.41 ERA in 14 outings this year.  The 22-year-old missed time this year with two separate oblique strains.

Starting pitcher Severino Gonzalez is 1-2 with a 0.95 ERA over his last three games.  Overall this season, the 20-year-old Panama native has a 5-4 record along with a 1.86 ERA in 20 combined games with Lakewood and Clearwater this season. 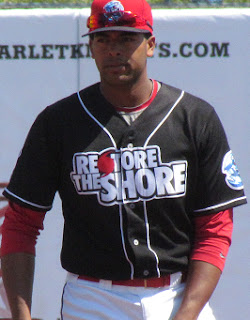 Heading into the weekend, first baseman Art Charles had gone 15-for-30 (.500 avg) over an eight-game stretch.  Charles, who was acquired for pitcher Michael Schwimer from Toronto this past spring, sports a .248 average with 10 homers and 60 RBI in 98 games this season.  The 22-year-old was a 20th round draft pick of the Blue Jays in 2010.

Righty starter Nic Hanson has tallied a 1.64 ERA over his last 10 starts with the BlueClaws.  Hanson, who missed time with a reported groin issue this season, is 2-2 with a 2.49 ERA and a 7.11 K/9 mark in 16 games in the Sally League this year.

Righty Drew Anderson, 19, has allowed just one unearned run in his last three starts.  The Phils’ 21st round draft pick last year has a 5-2 record with a 2.24 ERA in 10 games this season.

Reliever Tyler Buckley has allowed just two earned runs in 13 pro games since the Phillies made him their 27th round draft pick this year.  The 22-year-old product of the University of Arkansas Little Rock sports a 0.93 ERA with two saves and a .113 batting average against for Williamsport.  Buckley is one of four ‘Cutters to make the NY-Penn League All-Star game.  Joining him are catcher Gabriel Lino, third baseman Zach Green and outfielder Jiandido Tromp.