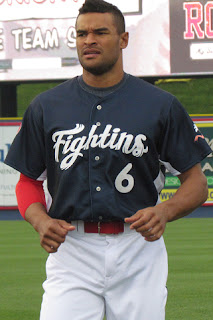 Aumont was sent home, Gillies is on the disabled list with a disputed injury, and Ramirez has been horrible in relief just four years after being acquired in the Lee trade with Seattle. Photo by Jay Floyd

On my 24th birthday, I unloaded shoes off of a truck at the Marshall’s department store. I put security devices on the expensive ones, took the tissue paper out of all of them, and put colorful stickers on each pair with size indicators so that they would be easier to re-pair if they became loose or “mis-mated” on the sales floor. Equipped with a couple of pieces of paper that said I was able to retain knowledge and a few dreams, I tagged, tissued, and stickered those shoes dutifully each day.

In sharp contrast, Phillippe Aumont is a 24-year old baseball player. In both 2012 and 2013, he saw time with the Philadelphia Phillies and has one of the most devastating, if not uncontrollable curveballs in all of baseball. By age 24, he has reached the top level of his profession twice, the equivalent of a rocket scientist working for NASA in the 60’s or a pediatrician working at CHOP. Aumont has already climbed the mountain and is now mid-mountain once more after not being among the September call-ups after issuing nearly a walk per inning in his time with the IronPigs.

Tyson Gillies is also 24. After starting the year with the IronPigs hitting just .154, Gillies was sent back to Double-A Reading. Gillies made some adjustments in his swing, returned to Triple-A, and hit .248 with nine steals in nine attempts. Gillies and Aumont were two of the three players that were traded from Seattle to Philadelphia for Cliff Lee in December 2009. The other? The now-25-year old J.C. Ramirez.  In an 8-0 loss to the Mets on June 23, Ramirez took the hill for mop-up duty and struck out the side. Since then? Ramirez has allowed 17 ER, good for a 9.77 ERA with a .348 BAA and a .432 OBPA.

At age 24, all three players entered the 2013 with high hopes. Aumont started the year in the Phillies bullpen while Gillies was promoted to Lehigh Valley. Ramirez had the bumpiest off-season, being designated for assignment but made his way to Triple-A before earning a shot with the Phillies. Now? The three are skeletons of a trade gone wrong, the reminders of what is fast becoming the biggest mistake in Ruben Amaro‘s tenure. 24 was not too long ago for me and others on the PN staff – from 24 through our current ages, we developed invaluable skills that have helped us continue to push toward our dreams. Aumont, Gillies, and Ramirez, at 24, 24, and 25 respectively, still can be contributing Major Leaguers, but they would never be able to match what Cliff Lee could have provided in 2010.

In 2010, there were only three Major Leaguers more valuable than Lee according to FanGraphs and they were all hitters. Josh Hamilton, Evan Longoria, and Carl Crawford were the only players to accumulate more “wins” than Lee. At a $9 million salary, Lee was worth $27.9 million in performance according to FanGraphs. At this rate, it is fair to question whether or not Aumont, Gillies, and Ramirez will ever be able to accumulate seven wins above replacement in their entire careers, yet alone one season.

At the time, Seattle GM Jack Zduriencik said that Amaro made the trade to “replenish (the Phillies’) farm system“, and that was the line you heard repeated again and again. Yet, the trade itself did nothing more than end up depleting the Phillies system. Because of the hole created by Lee, the Phillies went “all in” and acquired Roy Oswalt on July 30, 2010. Amaro said the move was to have one of the best starting rotations in all of baseball. But why give up a 6.5 win pitcher in 2009 when the best you can replace him with is a 3.0 win pitcher, knowing you’ll have to pay a heavy price tag (J.A. Happ, Jonathan Villar, and Anthony Gose) and you’ve already given up prospects to acquire a pitcher who would win the Cy Young in 2010?

We have the benefit of hindsight for all of these comments. In a best case scenario, Gillies would have been an electrifying center fielder that could have negated the need to trade for Ben Revere. Aumont could have been the bullpen arm that got to Philly in 2011 instead of 2012 and made the need to sign Mike Adams irrelevant. And J.C. Ramirez could have been the fifth starter for a rotation of Halladay, Lee, Hamels, and Kendrick. If any one of those scenarios would have panned out, the trade wouldn’t have been so bad. Yesterday, Aumont was sent home while Gillies is on the disabled list with an injury he says he doesn’t have. Ramirez is with the Phillies but is in the midst of a streak of nine appearances where he has allowed at least one run, good for a 12.75 ERA in that span.

Instead of any of the rosy best case scenarios, the ones that have the Phillies keeping the prospects they traded for Oswalt, Revere, or even the ones they used to acquire Hunter Pence, yesterday was a crash-into-the-wall reminder that the decision to deal Lee was a horrible failure, the final nail in the coffin if anyone had any doubt that, of the two decisions made on December 18, 2009, one was right, the other wrong.