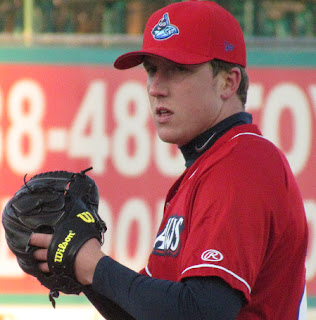 The Florida Instructional League will provide an opportunity for a pair of Lakewood hurlers that were sidelined with injuries this summer to make up for some missed time. Shane Watson and Zach Cooper will be among the Phillies prospects spending time in Clearwater at “instructs” over the next several weeks.  The pair will be able to put themselves on display for organizational coaches and brass while they take strides to excel and bounce back from injuries that forced them to miss time this year.

Watson, who has been sidelined since early July with shoulder inflammation, saw a specialist on Monday and was cleared to begin a throwing program.  The 20-year-old was the Phillies’ top selection (40th overall) in last year’s amateur draft out of Lakewood High School in California.

The hard throwing righty is quite excited for his impending return to the mound but has a fair grasp of the slow type of progress he’ll need to make before actually facing live competition.

“I’ll probably start throwing (on) the 18th and then I should, hopefully, get an inning or two in the instructs.  But, if I don’t, it’s no big deal.  I’ll go home for a little bit and then come back out there to get stronger early for spring training,” Watson said on the most recent edition of the PhoulBallz Podcast.

Cooper, the Phils’ 15th round draft choice out of Central Michigan University last year, missed time with bicep tendinitis during the latter portion of the season.  In 33 relief outings for the BlueClaws this year, the right-hander tallied a 1-3 record with two saves and a 3.97 ERA.

Midway through the 2013 season, Phillies minor league pitching gurus suggested that Cooper alter his delivery in order to improve his offerings to opponents.  The results were clear as his difficulty with keeping the ball down with his normal over-the-top delivery was no more after he lowered his arm angle.  He also saw an increase in velocity as well as additional movement in the form of some welcome sink action.  Not all the results were positive though, as the 23-year-old feels his arm issue was a result of the new mechanics.

“It’s been a very interesting year, dropping down, but you’ve kind of got to roll with the punches a little bit and you…understand that going from over-the-top to side-arm, you might run into something like that, just the body getting used to it.  It’s kind of part of the learning experience,” Cooper said recently in an exclusive interview.

Another player that will be working out with the instructional league team is Phillies first baseman Ryan Howard, who has been out of action with a left knee issue dating back to July.  Howard has been rehabbing the ailment in Clearwater in recent weeks.

Also on the latest PhoulBallz Podcast Watson spoke of Howard being his favorite player in high school and the feeling that comes along with now being a peer and teammate of the former National League Most Valuable Player.

Glancing back at the Phils’ instructional league roster from a couple years back, the organization has graduated three players to the major leagues from that collection of talent.  Cameron Rupp, Cesar Hernandez and Cody Asche were all among the players assigned to this minor league bonus time back in 2011.