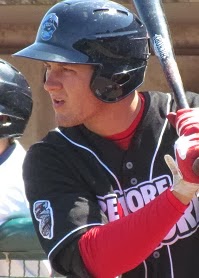 Throughout the off-season, I’ll be checking in with various players from around the Phillies organization to see how they’re staying in shape and how they’re keeping busy during the colder months. To kick things off, third base prospect Mitch Walding, the Phils’ 5th round draft selection from 2011, took time to answer some questions about what he’s been up to since he wrapped up the 2013 regular season with the Class A Lakewood BlueClaws.

Walding, a California native, batted .224 with 18 doubles, two triples, a home run and 42 RBI this year with Lakewood.  His season wrapped up early as he was sidelined with a rib fracture and missed time in the closing months.  Equipped with a strong arm at the hot corner, the 21-year-old is a quality defender and was dispatched to the Phillies’ winter academy in the Dominican Republic, where he made up for some missed time, playing there during November.

– You ended the regular season on a down note, with the rib injury.  Clearly, you must be back to full health, as the Phillies had you in action here at their Dominican academy.  But, how did the recovery turn out and were there any lasting effects while you were down there, playing?

It was all healed up before I got to the Dominican.  I played all the way through with no issues.  Everything’s 100-percent and I’m feeling good!

– I mentioned you spent some time at the Dominican academy.  What can you tell me about your time there?

It was a cool experience.  It was definitely nice to see where a lot of my teammates come from and the lifestyle that they live.  It was cool to be able to go to another country and play ball over there.  Just to basically, to see a different lifestyle and get a little different culture change.  I mean, all in all, it was a good experience and I learned a lot from the coaches there.

– That academy is not the same as the Dominican Winter League, as some people don’t realize.  How much of it is working out on the fields and training and is there an exhibition schedule that you are all slated for, while you’re there, and is that internal or against other clubs?

Yeah, it’s a lot like our instructs down in Florida.  You basically just go and you practice all morning and you take batting practice, and early work, and you play a game.  We played the Yankees or Reds or Mets.  It’s kind of just like instructs.  You play different teams around noon, 1 o’clock-ish.

– I know you went down there with some Phillies teammates that you’re familiar with, like Larry Greene Jr. and others.  How did you guys adapt or perform during your time down there?

We all did pretty well.  At first, it was a different thing for us, with the different lifestyle and just being in, you know, being in a dormitory kind of setup, living at their complex.  You’re living, eating, sleeping baseball everyday.  Where, you know, usually we can go home or get away from the ballpark.  But (at the Dominican Academy), you’ll actually stay there, so that was kind of different.  All in all, we had a good time and we bonded more together as buddies and stuff because we were always right next to each other all day long.

– I know some players will hold down jobs to supplement their income or perhaps give back by participating in coaching at baseball clinics.  Do you do anything like that during the off-season right now?

No.  I mean, I might do some baseball stuff with some clinics.  Working wise, no.  I usually don’t do that.  I’m just in California, hanging out with my family for the holidays.  I might do a few things with some kids, clinic wise.  But other than that, no, not working.

– Once you’re back from the Dominican, how much down time do you take.  Being there was good for you, as you got to make up for any missed time during the regular season, but afterward, how long do you go before you pick up a bat or get back into fully working out?

I took about a week off.  After about a week, you start getting bored, you have to find stuff to do.  So, I started lifting pretty much right after about a week.  Hitting- I’ll kind of start getting back into that here pretty soon.  I haven’t hit yet, but I started throwing a little bit, just to make sure my arm’s still in shape.  So, mainly just lifting and hitting I’ll be doing a couple times a week.