Throughout the fall and winter seasons, our weekly rundown reviews how Phillies players are performing in the various off-season leagues around the globe. Read ahead for the latest on many familiar names, some top prospects and plenty more. 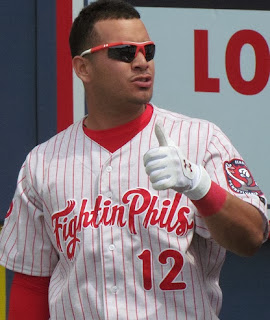 Catcher Sebastian Valle– The righty batting 23-year-old had a big day on Sunday for Los Mochis.  Playing right field, Valle went 3-for-4 with a homer and an RBI.  Overall in 36 games, Valle is batting .286 with with seven doubles, two home runs and seven RBI.  Valle posted a .203 batting average with 12 homers and 41 RBI in 98 games with Double-A Reading this year.

RHP Kevin Munson– The 24-year-old, who was picked up by the Phillies in last week’s Rule 5 draft from Arizona, has posted a 1.59 ERA with no decisions in five relief outings with Hermosillo.  Munson was a 4th round draft choice by Arizona in 2010.

3B/1B Maikel Franco–  The righty batting 21-year-old went 3-for-14 (.231 avg) with a double, a triple and an RBI in his last five games.  Overall, in 41 games, Franco has tallied a .241 average with two home runs, 13 RBI and three steals for the Gigantes.  Franco became highly touted in 2013 as he collected 31 homers and 103 RBI with a .320 batting average in 134 games with Class Advanced Clearwater and Double-A Reading during the regular season.

Catcher Tommy Joseph– The 22-year-old righty hitter has a .192 average with two doubles and two RBI through nine games for the Estrellas, but hasn’t played since November 27th.  Joseph missed considerable time with concussion related issues during the 2013 regular season and batted .179 in 36 minor league games.  Acquired in last year’s Hunter Pence trade, Joseph was a 2nd round draft selection by the Giants in 2009.

OF Leandro Castro– The 24-year-old is currently playing in a backup role.  He sports a .254 average with five doubles and eight RBI in 23 games for the Estrellas.  In 117 games for Triple-A Lehigh Valley this year, the righty batting Castro tallied a .256 average with eight home runs and 55 RBI.

1B/DH Jim Murphy– The 28-year-old Murphy returned to off-season league action last week, going 2-for-7 with a walk and a run scored for Licey.  The 2013 Double-A All-Star had been released by his Venezuelan League team last month.

Shortstop Freddy Galvis– The 23-year-old is batting .288 with 10 doubles, one triple, two home runs and 20 RBI and four stolen bases in 41 games for Zulia.  The switch-hitting Galvis sported a .234 average with six home runs and 19 RBI in 70 big league games with the Phillies this year.

RHP Severino Gonzalez– The 21-year-old, who was honored as the Phils’ Paul Owens Award winner this year, has posted a 0-1 record along with an 8.10 ERA and a .414 batting average against in four appearances for La Guaira.  Gonzalez last pitched on November 22nd.  In the regular season, Gonzalez posted a 7-5 record with a 2.00 ERA and a 10.33 K/9 mark in 25 games at three levels of the minors.

LHP Mario Hollands– In six games (two starts), the 25-year-old has a 1.26 ERA with no decisions for La Guaira. Hollands has struck out 12 batters and walked five in 14 1/3 innings. Hollands, the Phils’ 10th round draft selection out of UC Santa Barbara in 2010, went 7-3 with a 2.86 ERA in 27 combined games with Clearwater and Reading this year.

C Gabriel Lino– In a reserve role, Lino has been getting at bats sparingly for Lara.  The 20-year-old is 0-for-4 this month and is 0-for-6 overall in seven games played.  The right-handed hitting Lino was acquired from Baltimore in the 2012 Jim Thome trade.

Infielder Andres Blanco– The 29-year-old is batting .214 with a double in 10 games for Magallanes. Blanco, who played with the Triple-A Iron Pigs in 2012, is a .255 hitter in 235 big league games.  The switch-hitting Blanco was re-signed by the Phillies this off-season.