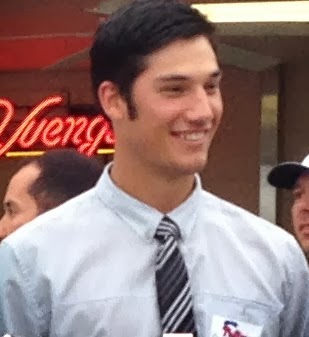 Outfielder Cameron Perkins has been one of the Phillies’ most promising prospects since he was selected in the sixth round of the 2012 draft. The righty batting outfielder has been a solid performer in many aspects of the game and is closest to the big leagues of any player from that year’s Phils draft class.

Perkins signed quickly and upon his pro debut he batted .158 with three RBI in five games for the Gulf Coast League (rookie level) Phillies. Following a promotion to the short-season Class A Williamsport Crosscutters, Perkins shined. In 67 games, he posted a .304 average with 23 doubles, one triple, one home run and 38 RBI.

An aggressive swinger, Perkins was a top performer in the Class A Advanced Florida State League when he was sidelined with a fractured wrist after being hit by a pitch on May 31st. At the time of his injury, Perkins was among the league leaders in several offensive categories.

His .808 OPS in 105 total minor league games last season certainly proves there’s already some pop in his bat. The youngster’s six-foot-five 200-pound frame offers some upside for development with power at the plate. It’s possible that Perkins’ frame may never fill out to strapping Pat Burrell type proportions, but with a similar build to Von Hayes, who exceeded 15 homers in a big league season five times and led the National League in doubles once, there’s damage that can be done with his stick.

This off-season, after the Phillies learned that Kelly Dugan‘s turf toe would prevent him from participating in the Arizona Fall League, the club sent Perkins to fill the void, as they are required to have seven active players there.  In 18 games with Peoria, Perkins batted .216 with four doubles, two triples and three RBI.

The 23-year-old puts the ball in play with frequency and makes a lot of contact, keeping strike outs to a minimum.

Defensively, Perkins has adapted to his new position as a corner outfielder swiftly, after playing third base in college and after manning the corner infield spots upon debuting as a pro with Williamsport in 2012. The move provides an easier path to the upper levels of the Phils’ system that is clogged with young talent at third base.

On the bases, Perkins hasn’t offered much in terms of speed. In 2012, he swiped five bags in seven chances, while he was successful four times in nine attempts in 2013.

The Purdue product was honored by the Phillies last year for working the most hours of community service among Threshers players.

Perkins seems suited to get plenty of time at the Double-A level in 2014, although congestion in the outfield at the upper levels of the minors could force him to begin the season back with Clearwater.