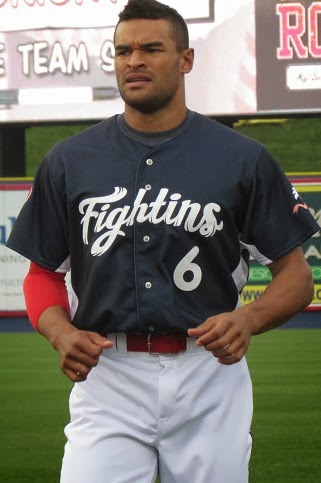 Outfielder Tyson Gillies has been plagued by injuries during his time in the Phillies’ organization.  In 2009, the British Columbia native was acquired in the trade that sent Cliff Lee to Seattle.  Due to an inability to stay healthy, Gillies has not made the type of progress that the Phillies once hoped he would.

When he was dealt to the Phils, Gillies was a top prospect of the Mariners that had played in the MLB All-Star Futures Game and appeared to be a solid candidate to possibly replace Shane Victorino in center field when the time came.

In 2009, Gillies became a highly regarded player in the Mariners organization, as his offensive output excelled. Gillies posted a .341 batting average, which was good enough for third highest in the minors, with a Seattle organization leading 44 steals and a .916 OPS in 124 games with Class A Advanced High Desert.

Over his four seasons since joining the Phillies organization, Gillies has tallied a .217 batting average while stroking 16 homers, driving in 60 runs and swiping 28 bags through 220 games.

Since he was acquired, along with J.C. Ramirez and Phillippe Aumont, Gillies has seemed fragile. Recurring left hamstring issues, a nagging foot injury, a behavioral suspension and a concussion have forced Gillies to miss considerable time, although his 114 games played in 2013 more than doubled his total (106) from the previous three years in the Phils’ system.  He also was faced with a drug arrest while rehabbing in Florida, although those charges were later dropped.

Last season, Gillies’ hamstring concerns returned late in the year and he ended the season on the disabled list.  His main obstacle, however, was an altered approach at the plate, which resulted in an early-season demotion.  Through 19 April games with Triple-A Lehigh Valley, Gillies posted a .154/.276/.231 line.  He was sent back to Double-A Reading, where his production picked up quite a bit (267/.312/.477 through 51 contests).  In July, the left-handed batting prospect returned to Lehigh Valley and closed out the season with a .238 average, one homer, three RBI and seven stolen bases over his final 31 contests for the IronPigs.

Gillies told me in an interview during the last week of the season last year that his 2013 was very disappointing.  The six-foot-two 205-pounder felt as though if he had proven himself to be healthy and put up some good numbers in the minors that he could have contributed to the big league Phillies, who had loads of injury openings and needs during the season.  Despite his level of dissatisfaction with himself, Gillies, who is a very mature-minded player, was pleased for teammate Steve Susdorf when he got a proverbial cup of coffee with the big club last summer.

Defense has definitely continued to be a major asset for Gillies, who has strong range and possesses a very good arm.  His ability to gun down brazen runners who may doubt Gillies’ defensive skills is something coaches have taken notice of, especially last year when he left a lot to be desired at the plate.

A solid line drive hitter that displays some gap power, Gillies is well known for his hearing impairment. Diagnosed at an early age with significant hearing problems, Gillies grew up using hearing aids and has become accustomed to playing baseball with a slight disadvantage. Gillies is also quite selective at the plate and is very capable of forcing pitchers to throw more pitches and can draw walks.

Pitch recognition is the main area where the Phillies’ coaches feel Gillies needs to take strides, aside from staying off the disabled list, of course.

In the end, Gillies’ ceiling and the Phillies’ patience with him will depend on the 25-year-old’s health.  While fans have grown impatient with the talented Canadian, it’s not farfetched that the Phils could share the same opinion and cut ties with Gillies if serious progress is not displayed this year.  Look for Gillies to get some late-inning substitution time during the spring training exhibition season and to begin the 2014 season in the Lehigh Valley outfield.