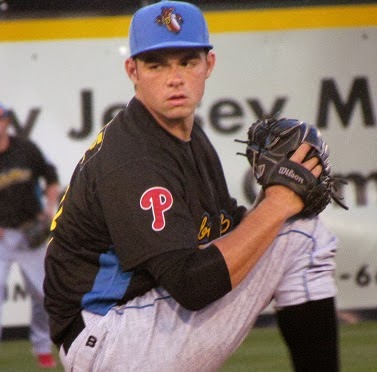 Biddle, who was the Phils’ top draft choice (27th overall) in 2010, represented the organization in the MLB All-Star Futures Game last year.  Now, in his first time in big league camp, Biddle looks to leave a solid impression on coaches and team brass as he targets a Major League  debut this year.

This week, Biddle pitched against his Phillies teammates, as they competed in an intrasquad game.  The outing wasn’t very successful for the 22-year-old, but he took some positives out of surrendering hits to the likes of Ryan Howard, Ben Revere, Kevin Frandsen and others, while showing that he’s capable of competing at this level but striking out Marlon Byrd and Cody Asche.

Biddle talked about the silver lining of a rough appearance, Phillies spring instructor Larry Andersen, being complimented by Roy Halladay and much more.  Read ahead for our latest exclusive entry from Jesse.

“The experience was great.  It was a pretty awesome moment.  You had a guy like Ben Revere leading off, uh, Chooch batting second.  That’s a really cool lineup and we have a lot of really good talent, obviously.  It’s nice to be able to compete against those guys.  Numbers wise, I gave up a few singles and some hits, but I was really happy with my ability to throw strikes and attack the zone.  I left a couple pitches up to some really, really good hitters and that’s what happens, so it’s just a learning process.”

“I got some feedback from Ryan Howard and Kevin Frandsen, among some others guys, and, you know, they were just talking to me about some little mechanical things that they saw, that they were able to pick up on some different pitches.  The kind of stuff that, you know, you have to learn those things and learn those little nuances that help you become a big league pitcher.

“It’s just something to put in the back of your mind and work on in your bullpen sessions.  That’s things where you want to create that muscle memory.  And as soon as Ryan Howard told me what he saw, that was kind of a light bulb just went off in my head and I realized that it’s just me switching a little bit of my mentality on the mound and being able to kind of getting me back in line.”

“No one’s ever going to have higher expectations of me than myself.  The bar I set for myself every year is way beyond what anybody else is going to set for me, so I don’t worry about what publications are saying, or anything like that.  I don’t really see any of that, aside from the occasional person posting something on Twitter.  But, it’s really not important to me.  There’s so many guys around baseball…who can really play, so to be able to be compared among them and be able to kind of hold my ground, it’s pretty cool.  But at the end of the day, none of that really matters once you get inside the lines.  When push comes to shove, you’ve got to just throw strikes and get outs.”

“I mean that’s a compliment that I definitely- that I’m really honored by.  You know, he’s a Hall of Fame pitcher and he came up to me and he told me that he really likes the way I throw the ball and he thinks my stuff is really good.  That’s a huge confidence booster.  That’s something that I definitely was really honored by and humbled by and it meant a lot to me.   But, once again, Roy Halladay could tell me that my stuff is great, but it doesn’t really help me out once I get between the lines.  That’s not really gonna get me to the big leagues.  That’s just a confidence booster that I need to use to get better every day.”

“LA is awesome.  He’s awesome.  He is definitely a guy we love having at camp.  He really, I mean, he was talking to me about some mechanical things, just how important it is- he really stresses getting the ball down in the zone.  And he was just talking about the difference between throwing a fastball and change up and some little nuances here and there.  LA is just the funniest guy.  He’s always got a joke.  He’s always got something to lighten the mood and he’s somebody that you really look forward to seeing during the day.”

On the impressions that guys like Andersen, Mickey Morandini, Larry Bowa and others, who have been to the World Series with the Phillies, leave on the team in camp-

“I think that there’s a sense of, you know, and it’s also true for guys like Hamels, Utley, Rollins guys who have already won a World Series, there’s a sense of we want to win and we want to win now.  And that’s something that you’re expected to do in the Phillies organization.  With the success that they’ve had with the ’93 team and 2008, there’s a sense of wanting to win and wanting to win as soon as we can.  There’s not really, you know, nobody wants to wait.  Nobody’s trying to rebuild the team.  There’s a whole lot of talent in the club house and a whole lot of guys who want to win.”

“As a team, it’s just about getting better and working on stuff.  If you go out there and you pound the zone and you throw a lot of strikes and you give up a bunch of jam shot singles and an occasional double that goes down the line and you give up three or four runs, but that day you did your job, you threw good pitches, you got outs, well, you can chalk that up to success.  You know, maybe you were working on your change up or something like that.  You’re always working on something new in spring training.  So, there’s really no worry about wins/losses and things like that.  As long as you’re getting better and as long as you’re working on the stuff they want you to work on, then that’s all you can ask for at the end of the day.”

Sharing details on some loved ones planning to view him live, in action this spring-