With pitchers and catchers starting tomorrow, what better time than now to preview the starting pitchers that are non-roster invitees to Phillies camp? 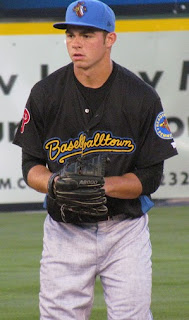 Ian thinks Biddle will be a Phillie some time in 2014. Photo by: Jay Floyd

Ranked 40th by Marc Hulet of FanGraphs, 77th by Keith Law, and 53rd by MLB.com, Germantown Friends’ left-hander Jesse Biddle will be a name on everyone’s horizon in 2014. The 2010 first round pick turns just 23 in October 2014 and is in big league camp for the very first time. In his first nine games at Double-A Reading in 2013, Biddle posted a 2.50 ERA with a .140 BAA, dominating hitters with 10.72 K/9 IP. From the tenth start on, Biddle battled injury and ineffectiveness to post a 4.20 ERA over the remaining stretch of the season. Biddle’s final line (3.59 ERA, .210 BAA) was solid but some dings and nicks had some folks worried about the end of Biddle’s 2013 season.

In 2014, Biddle, last year’s Prospect Nation’s number one prospect, will get a shot to go deep into camp, with a relatively open #5 spot open in the rotation. Biddle is a relative long shot to make the Phillies out of training camp but considering his competition, Roberto Hernandez, Jonathan Pettibone, and Miguel Gonzalez, he may be able to make a surprisingly strong case to see big league time.

Chances of Making Phils out of Spring Training: C-. At 22, Biddle is very, very young. But Biddle showed some success in Double-A Reading even through minor injuries and finished with a career-high in starts and a solid stat line. There are a few scenarios where Biddle could make the team out of Spring Training, particularly involving injuries. It’s a small shot but Biddle has a chance.

Chances of Seeing Time with Phils in 2014: B+. I think Biddle will see time with the Phillies in September if not sooner. The talent is real and the ceiling is greater than Hernandez and Pettibone. The Phillies used ten starters in 2013. Biddle right now sits at about seven or eighth on the Phillies starter depth chart. I think he will get the call in 2014, even for a cameo.

The Young Player with an Opportunity

Hollands, 25, is a young-ish left-handed pitcher that split his time fairly evenly between Clearwater and Reading in 2013. Hollands was very successful in his repeat trip in Clearwater (4-1, 1.56 ERA) but struggled in his promotion to Reading (4.31 ERA, 1.436 WHIP). The Phillies haven’t had a player quite like this on their non-roster invitees list in a while. This could be Hollands true last chance in terms of being able to impress the Phillies brass and make one last final impression.

Chances of Making Phils out of Spring Training: None. Even with depleted depth, Hollands has no shot to make the team out of camp in 2014.

Chances of Seeing Time with Phils in 2014: F-. Hollands has average strikeout capability and a slightly above average ability to prevent walks, but is horrible at preventing hits. I don’t think he has a very good shot at making the Major League roster at all in 2014.

Chances of Making Phils out of Spring Training: None. Even with depleted depth, Manship has no shot to make the team out of camp in 2014.

Chances of Seeing Time with Phils in 2014: None. Manship has below-average strikeout capability, is prone to hits and homers, and doesn’t keep hitters off the bases. I really don’t think Manship will see any time with the Phillies in 2014.

O’Sullivan, 26, re-emerged from the rubble of Triple-A pitchers last year with the San Diego Padres to post a 3.96 ERA in 25 IP after spending 2012 in Triple-A. O’Sullivan has a varied repertoire, including a 90 MPH fastball, complimented by a slider, change-up, and cutter.

Chances of Making Phils out of Spring Training: D-. O’Sullivan has one of the better chances of all the non-roster invitees to make the team out of camp but his chances are still rather low.

Chances of Seeing Time with Phils in 2014: B-. O’Sullivan was one of my favorite under-the-radar signings of this offseason. O’Sullivan could easily make the team at any point during the 2014 season.