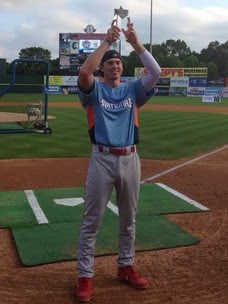 Upon signing his first pro contract, the righty batting slugger quickly showed his skills with the bat as he sported a .284 average with 13 doubles, a triple and three home runs for the rookie level Gulf Coast League Phillies in 2012.  Green had been committed to playing baseball at Oregon State prior to the MLB draft.

With a body type that is prototypical of a corner infielder at six-foot-three 210 pounds, coaches and scouts speak highly of Green’s raw power.  The California resident represented the Class A short-season Williamsport Crosscutters in the New York-Penn League All-Star Game last year, winning the league’s annual home run derby.  With the Cutters, Green batted .252 with 20 doubles (league lead, tie), a triple, 13 homers (league leader) and 41 RBI.

Green is toward the bottom of a growing depth chart at the hot corner for the Phillies.  Behind developing stars such as Cody Asche and Maikel Franco as well as prospect Mitch Walding who had a lackluster 2013 season with Class A Lakewood, Green hopes to continue to excel and climb toward his ultimate goal of playing in the big leagues.

Having played shortstop at Jesuit High School (CA), where he batted .403 in his varsity career, the athletic Green was moved to third base after turning pro and has been very capable at the position.  The strong armed, accurate throwing youngster has nice range and quick reflexes.  It is possible that as Green ages and adds pounds that he could change positions, which he would welcome if it helped him get to the big leagues.  His passion for the game is clear as Green simply wishes to play and hit at progressing levels and doesn’t worry about his defensive assignment..

Speed is not a big factor of Green’s game, but it’s not a hindrance either.  Successful in 10 of 17 stolen base attempts in the minors, fans should not expect a great amount of steals from Green, though he’s got the type legs that could help him go first-to-third and take an extra base when the chance presents itself.

It’s likely that Green will begin his 2014 campaign with the Class A Lakewood BlueClaws. It will be interesting to see how his power performs at Lakewood’s home field, FirstEnergy Park, which is typically favorable to pitchers.  Williamsport’s Bowman Field, where Green tallied nine homers last season in 36 contests, plays the same way, so look for big offense from this soon-to-be 20-year-old this year in the Sally League.