Please check back this afternoon for #13. 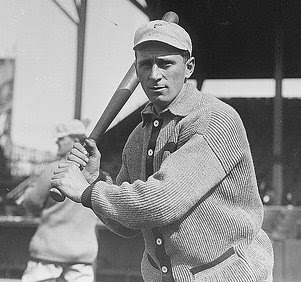 Signed as a 19-year old amateur free agent, Sherry Magee of Clarendon, PA made his Phillies debut two days after signing with the club in 1904. Magee would replace Shad Berry in the outfield and become one of best outfielders in club history.

During his run with the Phillies, Magee led the Major Leagues in HR, was fourth in runs scored, third in RBI, third in steals, 22nd in batting average, 29th in OBP, and tenth in SLG. Magee occupies similar places in Phillies history, ranking eighth in runs, seventh in RBI, fourth in steals, and 44th in SLG.

Magee’s clubs were unable to accomplish much during his time in Philadelphia, posting an 838-835 record with no finishes higher than second place in 1913. This detail becomes more important when put in the context of what the Phillies did the season after Magee was traded: the Phillies would trade Magee for Oscar Dugey and Possum Whitted and the 1915 squad would win the NL Pennant but fall short in the World Series in five games. Dugey hit .154 in the 1915 regular season and was used only as a defensive replacement in the World Series while Whitted hit .281 in the regular season and .067 in 17 World Series PA. In a World Series where all Phillies’ losses were decided by one run, Magee, who hit .280/.350/.392 for the Boston Braves, may have made the World Series closer.

Magee would win a World Series title of his own with the Cincinnati Reds in 1919 before retiring. These days, Magee is notable for being on the short-list of top players of all-time to not be in the Hall of Fame. Magee ranks 96th in baseball history among position players in fWAR, in front of a number of Hall of Famers.