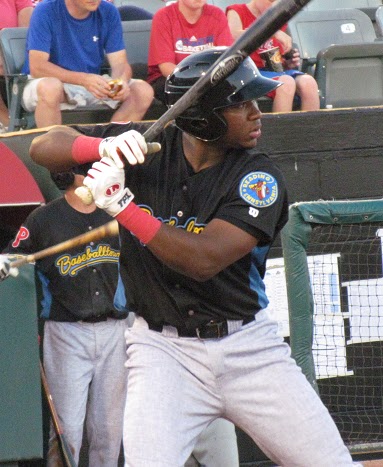 Martin says it is time to play the young talent. Including 21-year old Maikel Franco (pictured). Photo by: Jay Floyd

When Ruben Amaro Jr. became the Phillies general manager in November of 2008, the confetti on Broad Street was still fresh on the ground from the World Championship parade. Phillies fans were still celebrating the team’s first World Series in 28 years.

Fast forward 5 years later and those same fans have grown restless. With an aging roster filling up the starting positions and coming off the second consecutive season without a playoff appearance the moral of Phillies fans is as low as it has been in nearly 10 years.

It is clearly time to rebuild. Cody Asche should without question be the everyday third baseman this season. Maikel Franco should see major league time this season splitting first base with Ryan Howard. Darin Ruf finally deserves a full season starting in the major leagues in the outfield. Unfortunately, 35-year-old Jimmy Rollins is blocking a position that Freddy Galvis should be starting at for the majority of the 162 game season.

It is time to see what these young prospects have to offer for the future of this team. The Phillies are stuck playing in a tough division that includes last year’s division champions the Atlanta Braves, a young and hungry Washington Nationals team, and an up and coming New York Mets team filled with young talent. All those teams have previously taken their lumps and have rebuilt with young talent across the board to become contenders according to the oddsmakers at MyTopSportsbooks.com

However, Ruben Amaro isn’t ready to pick up that confetti off the ground. He refuses to accept that the core of the 2008 World Series team have all aged out of their prime (except for Cole Hamels) and can no longer perform at a championship level. Amaro continues to hold on to the past that he didn’t even build. How else can you explain signing Marlon Byrd for $8 million a year? Or better yet signing former Phillies all-star Bobby Abreu, who will be 40 years old by the time the season starts, to a contract and expecting him to be a contributing bench player.

Previous contracts given out by Amaro though has hindered him from being able to be very active in the free agent market this offseason. The team has $111.5 million committed to just six players alone in 2014. Those six players are Ryan Howard, Jimmy Rollins, Chase Utley, Hamels, Cliff Lee, and Jonathon Papelbon. To put that into perspective, that is more than the entire team payroll for 18 other MLB teams.

The Phillies seem to be stuck with what they have. The only thing worse than paying these aging players all this money to play poorly would be to pay them to do nothing at all. So what do the Phillies do then? Obviously, exploring any and all trade options would be a start. However, it seems unlikely they will be able to do that until the trade deadline when teams are looking for veteran players to fill out their rosters as they make a championship run.

Could someone like Jimmy Rollins be a player that playoff teams are interested in? I don’t see why not. He is a former MVP with playoff and World Series experience. These are the kind of moves the Phillies are going to have to look for throughout this season. Injuries happen also and a team could become desperate for a player with the past of Jimmy Rollins. It is essential that this team looks into getting rid of some of these older players and allowing the previously mentioned young prospects a chance to play and figure out how the major leagues work. Standing still and doing nothing, however, and standing pat with the team at hand is not the way to go about this.

Ruben Amaro seemed to decide a few years ago that he wanted the Phillies to run almost like the Yankees. However, it was quickly realized that no matter how many sellouts or new TV deals they get they will never have the resources to spend like the Yankees do. The Phillies would be wise to take a similar approach to the Yankees hated rivals the Boston Red Sox. There is talent in this farm system. Guys like Franco, Jesse Biddle, Asche, and Ruf are close to making an impact in the majors.

On top of that the Phillies still have a #1 starter in Hamels on the roster in his prime, a young Ben Revere that was ready to explode last year before an unlikely injury derailed his season, and Domonic Brown who just had a breakout season in 2013. If the Phillies just play it smart, use their farm system, and make a few calculated cheap veteran signings then they will be back in the playoffs in a matter of a couple of years. The bigger concern is whether or not Amaro is capable of doing that.

It is time for Amaro to put the checkbook away and to pay more attention to his farm system. It is time for the Phillies to try and grow their own talent instead of attempting to act like a poor man’s New York Yankees and buying it. After all, Ryan Howard, Jimmy Rollins, Chase Utley, Carlos Ruiz, and Hamels were all home grown talent. It is time to find some more home grown talent to replace them. Maybe, it might be time for Amaro to be replaced.