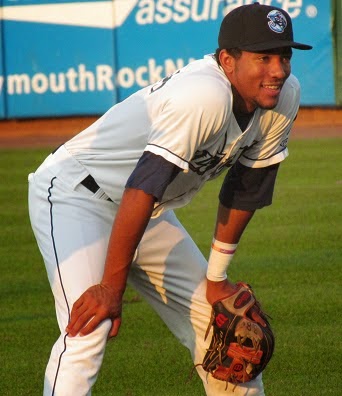 Equipped with big-time athleticism, a strong baseball IQ and all the right on-field tools, J.P. Crawford joined the Phillies system last year and quickly proved to be among the organization’s best prospects. Drafted in the opening round of last year’s amateur draft, Crawford looked sharp and put himself on the map as a fast rising talent in baseball.

Last year, Crawford posted great numbers at Lakewood High School in California, batting .432 in 25 games during his senior season and he stands as the school’s all-time leader in hits and runs scored at a school that also produced former Phillies 1st round draft choice Travis d’Arnaud.

Upon signing his first pro contract and making his minor league debut as an 18-year-old with the rookie level Gulf Coast League Phillies, Crawford was very impressive. He lead the GCL in batting for a considerable stretch and posted a .345 average with a homer, 19 RBI and 12 stolen bases through 39 games. To wrap up the regular season, the youngster was promoted two levels up to Class A full season Lakewood.

In the South Atlantic League, Crawford handled the jump quite well enough for a kid that was playing high school ball just three months earlier. Crawford sported a .208 average with a double, two RBI and two stolen bases in 14 contests. The move to the Lakewood BlueClaws was partly due to a season ending injury suffered by another well regarded short stop prospect Roman Quinn.  That vacancy opened the door for the stunning first-year pro.

A cousin of big league outfielder Carl Crawford, J.P. is also very close with budding Twins star Aaron Hicks. He credits the two more experienced players with helping him prepare mentally for the grind of a pro schedule and for what is ahead on his road to the big leagues.

With a solid six-foot-two 180-pound frame, the lefty batting Crawford projects to add power. Currently, Crawford doesn’t knock many balls out of the park, but drives balls into the gaps with enough authority to show there’s plenty of pop to build upon.

On the bases, Crawford has above average speed. With his lean build and long strides, he could definitely improve in this area to become more of a true stolen base threat.

Defensively, Crawford displays very good range and delivers the ball to first base with accuracy and quickness. Great footwork helps his throwing. He seems very capable of holding down the shortstop position as he ascends upward in the developmental ranks.

This past season, Crawford impressed coaches with his knowledge of the game and his adaptability.  Where some of older players might have possessed a lacking approach, Crawford shined and produced in ways that were beyond his years.

As a testament to Crawford’s tremendous potential, his manager with the Class A BlueClaws, former Phillies All-Star Mickey Morandini, stated during an interview with me this off-season, after being reassigned as a coach with Triple-A Lehigh Valley, that J.P. might be the first player he coached in A ball to catch up to him with the IronPigs.

It’s possible that Crawford will open the 2014 campaign with the Class A Advanced Clearwater. If Morandini has any level of clairvoyance, Crawford, who enters the season at the age of 19, could have a huge season. In case Mickey is less like Ms. Cleo than some fans may hope, a remarkable season in which Crawford further proves why he was selected with the Phillies’ highest draft pick since they chose Gavin Floyd 4th overall in 2011 might be more realistic.