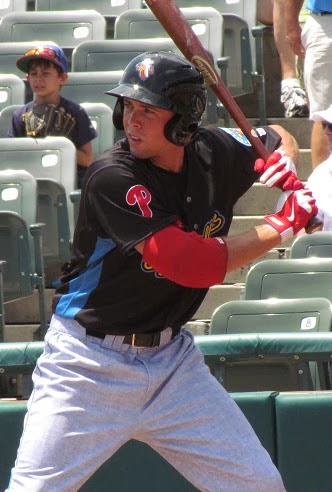 It took Kelly Dugan about four years to show and prove why he was once the Phillies’ top draft choice (2nd round, 2009).  An excellent campaign in 2013 has many believing that the young outfielder could be close to helping the team at the big league level.

Much hype surrounded Kelly upon being drafted to the Phillies, as an image of him on the set of his director father Dennis Dugan’s film Grown Ups, with many of Hollywood’s comedy elite, made the rounds.  In the years that followed, Dugan dealt with a series of injury concerns that kept the 6-foot-3-inch 195-pounder from fully establishing himself as a potential rising star.

Dugan would debut with the Gulf Coast League Phillies in 2009, after signing his first professional contract, posting a .233 average with eight doubles, a triple and eight RBI in 45 games.  The following year, with the GCL team and short-season Class A Williamsport, Dugan sported a .366 average with a homer and eight RBI in 28 combined games.  He missed roughly two months of action that year after he was hit in the leg with a batted ball during batting practice in June and later developed a staph infection that required draining.

In 2011, Dugan returned to Williamsport and represented the club in the New York-Penn League All-Star Game.  With the Crosscutters, in 47 games, he sported a .284 batting average along with two home runs and 21 RBI.

With Lakewood the following season, after missing time with a severely sprained ankle, Dugan displayed improved power and steady production, as he notched a .300 batting average, 12 homers and 60 RBI in 117 games.  Additionally, his OPS, at .857, was .127 points higher than his mark from the previous season, which was a major plus.

Last season, Dugan made a big splash in the Class A Advanced Florida State league, as he posted a .318 average with 12 doubles, three triples, 10 home runs and 36 RBI in 56 games.  With that excellent production, the Phils moved Dugan up a level to Double-A Reading.  There, in 56 contests, Dugan tallied a .264 average with 12 doubles, a triple, 10 homers and 23 RBI.

A drastic drop in walk rate between the two levels (9.7% to 2.2%) last year was quite concerning, but Dugan typically doesn’t struggle with being selective, so this should not turn into a trend that continues.

While the 2013 regular season seemed to be mostly injury free for Dugan, he missed out on participating in the Arizona Fall League after dealing with turf toe.

A refined approach at the plate a couple years back was a big reason for the strides Dugan has taken on offense.  Making the choice without consulting the Phillies, Dugan ended an experiment to develop an ability to switch-hit and began hitting strictly from his natural side as a lefty batter.

At the plate, the Encino, CA native, is confident and consistent.  He loves hitting.  Dugan, who has great bat speed, has shown abilities to drive the ball well and hit the other way.  Making contact is an area where the Phils will want to see Dugan make improvement, as he posted a strike out rate of 24.1% at two levels last year.

In order to ensure improvements during the winter months, Dugan spends time over the off-season privately working on his hitting with seven-time big league All-Star Reggie Smith in batting cages at the Dugan family home.

In 2012, concerns with Dugan’s hamstring during the preseason and then an ankle sprain in April had the youngster resigned to manning first base for the BlueClaws.  Once he was fully healthy, however, Dugan moved back to the outfield, where he feels most comfortable.  With Reading last year, Dugan, who has a strong, accurate arm, split his time evenly between left field and right field, but he has played about five times as many in right field during his career.

The 23-year-old displays average speed on the bases, but has a strong ability to read balls off the bat and get solid jumps on fly balls while on defense in the outfield.  Dugan, who is currently participating in his first big league spring training, is not a stolen base threat, as he was successful in one of five opportunities last season and sports a 66% success rate in steal attempts during his pro career.

In the coming season, Dugan should see time with the Triple-A Lehigh Valley IronPigs, although it’s likely he’ll return to Reading for opening day.  If he continues the solid progress with his bat and stays off the disabled list, Dugan could be helping the big league team before too long.