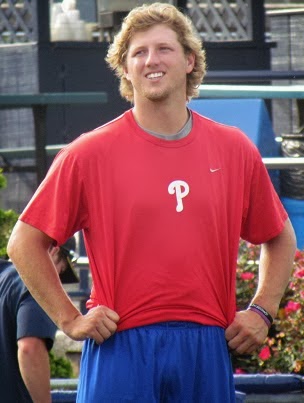 After a season in which Ethan Martin made his big league debut, the Phillies entered spring training with hopes that the young righty hurler would show enough in camp to prove they could rely on him as a contributor this year.  After experiencing discomfort in his throwing shoulder recently, not only where he’ll pitch this season, but also how much he’ll be able to pitch is unclear.

Diagnosed with a strained capsule and a strained triceps, the 24-year-old Martin has been shut down.  Ordered to rest for three weeks, the Georgia native will be re-evaluated following the down time.  Several months back, the Phils’ 2012 top draft selection Shane Watson, another right-handed pitcher, was diagnosed with a similar capsule injury and prescribed rest as well.  Watson required surgery to repair the issue when rehab did not have great results.

Originally selected by Los Angeles in the 1st round (15th overall) in the 2008 amateur draft out of Stephens County High School (GA), when scouts weren’t sure if he would proceed as a pitcher or a third baseman in his career, Martin had not posted great numbers in the minors prior to 2012.  He was acquired in the trade that sent Shane Victorino to the Dodgers.

The following season, the six-foot-two 195-pounder had a difficult time, posting a 9-14 record along with a 6.35 ERA and a .279 batting average against in 25 games (22 starts) for Inland Empire of the Class A Advanced California League.  In 2011, Martin split his time between the California League and the Double-A Southern League, putting together a 9-7 record and a 5.95 ERA in 37 games (12 starts).

In 2012, in a return campaign with Double-A Chattanooga, Martin began to show why he was such a high pick, as he tallied an 8-6 record with a 3.56 ERA en route to becoming a Southern League All-Star.  Following his trade to the Phillies, Martin looked unbeatable, posting a 5-0 record with a 3.18 ERA and a .206 batting average against in seven regular season starts for Reading in the Double-A Eastern League.

Martin also pitched very well for Reading in the EL playoffs that year, striking out 11 batters while walking none over 7 1/3 innings in a loss to Trenton, in which he surrendered three runs (one earned).

The improved output into the summer months last year earned Martin a call up to the big leagues, where he went 2-5 with a 6.08 ERA and a .261 batting average against in 15 games (eight starts).

When Martin was removed from his outing this past week with the shoulder concern, his velocity was maxing out at 85 MPH.  His 93-96 MPH fastball with little movement had become a signature for the young power pitcher in the past.  Martin also sports a hard slider and a plus curve ball.

The six-foot-two 195-pounder displayed tendencies to be better the first time through the batting order with the Phillies last year, which might lead to him being better suited for a role in the bullpen in order to limit his exposure to the opposition.

The area that has posed the greatest challenge for Martin has been his control, as his consistency with his mechanics have posed some concern.  Working to overcome those struggles, he has shown improvement with his walk rate in the past two seasons.  He’ll need to continue the trend of harnessing his command if he is to succeed in the big leagues.

Overall, Martin has steadily notched strong strike out numbers through his time in the minor leagues, averaging 8.74 K/9 in the minors over the last three seasons and 10.2 K/9 during his stint in the majors.

The injury for Martin, who grew up as a Braves fan, nearly assures that he won’t begin the 2014 campaign on the big league roster.  Look for Martin, if healthy, to open the season with Lehigh Valley, where he’ll look to bounce back and prove he is 100 percent and ready to help the Phillies.