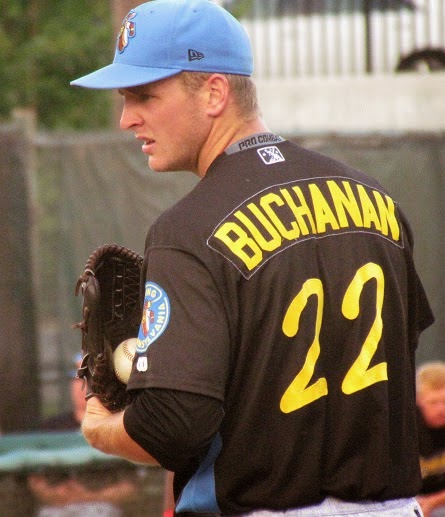 Righty pitcher David Buchanan, building on his excellent spring season with the Phillies, put forth a great effort to open the Triple-A schedule with Lehigh Valley on Thursday night.

Buchanan has displayed considerable improvement over the past year and received positive feedback from the likes of Roy Halladay, Cliff Lee, A.J. Burnett and Kyle Kendrick while pitching with the big league team in spring training.

Coaches and veterans alike were pleased with his pace, the way he attacks the strike zone and his manner of challenging opposing batters.  The uplifting words had a lasting impact on the Georgia native and he’s experienced a boost in confidence because of it.

“It’s something to build off of,” Buchanan said earlier this week.  “You know, when you hear that from older guys, especially from guys at the top level, that’s something that you really take to heart.  So, I’m going to continue to thrive off of the confidence that they gave me and the advice and incorporate it all and, hopefully, it comes out to success.”

The six-foot-three 200-pounder, who went 4-2 with a 3.00 ERA in six starts for the IronPigs last year to wrap up his season, says that adjustments to the grips on his cutter and curve ball have refined his arsenal and resulted in improved output on the mound.

In Grapefruit League competition, the Phils’ 7th round pick from 2010 posted a 1-1 record with a 2.25 ERA and a .146 batting average against while striking out 11 and walking two in 12 innings pitched.  His consistent efforts through five appearances (four starts) had his name in the mix to be included in the Phillies’ rotation this season.

“Just knowing that I was that close and being the last guy invited and being that close to making the team out of camp, that really lifted my spirits and it was a pleasure to be down there for that long.  I have no regrets,” Buchanan stated.

Right-handers Mike Nesseth and Luis Garcia as well as left-hander Jeremy Horst each added a scoreless/hitless frame for the ‘Pigs to lock down Buchanan’s first win of the season, a 4-0 victory over the PawSox in Rhode Island.

First baseman Jim Murphy led the Lehigh Valley offense with three hits including a double and a triple while driving in a run.  Additionally, Buchanan’s battery mate Cameron Rupp launched a solo homer for the IronPigs.

The Class A Advanced Clearwater Threshers were shutout, dropping their opener 7-0 to the Dunedin Blue Jays.  In a rehab outing, Phils reliever Mike Adams tossed a scoreless frame, allowing a hit while striking out two.  Adams is recovering from off-season shoulder surgery.