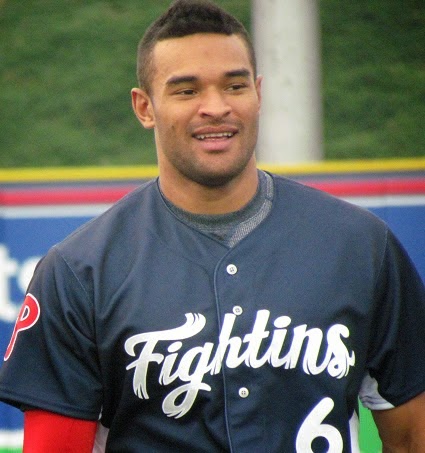 Bad luck continued for troubled outfielder Tyson Gillies on Friday, as the Phillies announced that the 25-year-old was suspended for three games.

Confirming the rumor that he had taken his frustration out on some equipment after a tough loss for Triple-A Lehigh Valley on Thursday night, a game in which Gillies went 0-for-5 and struck out four times, the youngster explained via his Twitter account what took place and resulted in the missed time.

“I apologize to everyone for my actions and know this can’t happen. Frustration got the best of me and I threw my equipment against the wall,” Gillies tweeted.

Gillies, a British Columbia native, joined the Phillies in December 2009 as part of the Cliff Lee trade with Seattle.  The lefty batting speedster has missed loads of time, playing in only 231 regular season games since joining the Phillies.

In the past four seasons, Gillies has been plagued by injuries which included repeated hamstring string issues and lengthy concussion concerns. Additionally, a drug arrest which did not lead to charges filed and a previous suspension that was the result of an angry tirade directed at a team bus driver have presented some concern for the toolsy youngster that was once ranked highly among Mariners prospects.

Aware of fans’ frustration with Gillies and the bad reputation that follows him, his IronPigs teammate Justin De Fratus spoke out about the misconceptions surrounding Gillies.

“He’s one of the best people I’ve ever played with,” De Fratus expressed with emotion. “The guy gives everything he has everyday he shows up to the field. He’s working so hard every day to be the best player he can be for this organization.”

A desire to stay healthy and succeed with little to show for it is bound to get to any player. Gillies’ teammates can definitely relate, according to the reliever De Fratus.

“When things don’t work out there are times when you feel alone and have no way out. Fans start judging your character based on whether or not you have success on the field and when you’re struggling with certain adjustments, sometimes you feel completely alone and all that’s left for you is to let your frustration out on something because that’s better than letting it out on someone,” De Fratus explained.

De Fratus, who opened the season with the Phillies and was sent down to Lehigh Valley after four outings, further expressed his positive impression of Gillies while also asserting his old school style wish for privacy behind the scenes.

“The fact of the matter is it’s nobody’s business what happens in the clubhouse. I just feel people need to know the real person Gillies is. The one that gives every ounce of himself on every single play, from the first pitch to the last. The guy who wants every one of his teammates to succeed. He’s one of the most amazing people I’ve ever met, who has been very unlucky with certain circumstances.”

Through nine games with the IronPigs thus far this season, Gillies has tallied a .184 batting average with a home run, three RBI and two stolen bases. He went 1-for-9 with a double in big league spring training this year.