-Both the Triple-A Lehigh Valley and Double-A Reading coaching staffs openly addressed an organization-wide focus on small ball prior to both clubs opening their seasons.  The directive, handed down by new Phils skipper Ryne Sandberg, will have the entire Phillies system playing a more aggressive style of baseball. 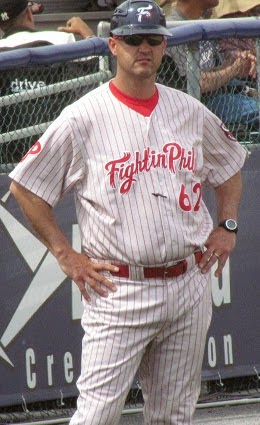 “I think we’re going to utilize a National League style of baseball dating back to the 70’s a little bit.  You’ll see some triples, some hit-and-run and some bunting.  I think it’s kind of an organizational philosophy since Ryne has taken over.  You’re going to see it implemented not only at the big league level, but at the minor league level.  It’s something we really stress, is base running, being aggressive, taking extra bases, sacrifice bunting, hitting and running.  So, you’re going to see a very aggressive game and it’s going to be a lot of fun to watch,” Reading manager Dusty Wathan said on Tuesday.

“I guess it’s just a little more attention to detail, doing the little things and, you know, we never really got away from it, but the home run was a big part of the game not too long ago.  So, we’re trying to get back to the stolen bases, the bunts, the hit and runs, you know, the little things that’ll help you win ball games,” Lehigh Valley bench coach Mickey Morandini stated.

-Wathan expressed confidence that last year’s Paul Owens Award winner Severino Gonzalez has the stuff to compete at the Double-A level, citing a mature frame of mind, describing a situation in spring training where the 20-year-old changed from the windup to pitching from the stretch on his own, in order to find his rhythm.

On the youngster with great control, Wathan added, “(Severino) can make the ball go both ways, up and down.  He changes speeds, his change up’s come a long way, so I absolutely think he can (compete in the Eastern League) and I think we’re in a good situation with him, because you can teach a guy to throw balls.  It’s more difficult to teach a guy to throw strikes.”

–Tommy Joseph will be the primary backstop for the Fightins.  Sebastian Valle will serve as the team’s backup catcher.  Joseph, who was the big get in the Hunter Pence trade with San Francisco in 2012, missed a large portion of last season while dealing with concussion symptoms.

-Flame thrower Kenny Giles will begin the season as the Fightins’ closer.  The 23-year-old, who is equipped with a triple-digit fastball, missed significant time last season dealing with two oblique strains on opposing sides while on the Class-A Advanced Clearwater roster.

-Wathan offered his thoughts on lefty Mario Hollands, who made his big league debut this week after pitching in Reading in each of the past two seasons…

“Aw, it’s awesome!  What a great story.  I think, uh, a guy that couldn’t break with the team for two years, you know, I know there were talks of, ‘We love the guy, but there’s no room for him’, all this stuff year after year.  Mario’s just one of those guys, he goes out there, like we say, he throws strikes, care free attitude, competes like crazy when he goes out there, great person, great teammate and he’s getting rewarded for that right now.”

-Righty hurler David Buchanan will be the IronPigs’ opening day starting pitcher, when they take on Pawtucket to open the season on Thursday.  In five Grapefruit League contests with the big league club this spring, Buchanan sported a 1-1 record with a 2.25 ERA while striking out 11 and walking two in 12 innings pitched.

–Maikel Franco will primarily man third base for the IronPigs, but the club’s coaching staff expects to get him occasional exposure at first base.  Franco, who played shortstop prior to signing as a pro, added to his versatility last year, playing some first with Reading and with the Gigantes in the Dominican Winter League. 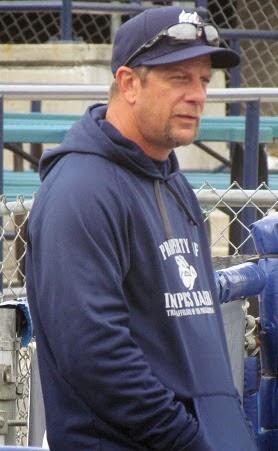 Morandini stated, about Franco, “He will get some opportunities to play first base, ’cause if, knock on wood, something happens to Ryan (Howard), and Franco gets the call, he’s got to be able to play over there.”

Morandini spoke of a few other IronPigs players…

On Leandro Castro– “I mean Castro’s an interesting player.  He’s put up some good numbers where he’s been.  He’s got some speed.  He plays good defense.  He’s got a strong arm.  So, I think he’s someone we can watch a little bit.”

On Tyson Gillies– “He’s got all the tools.  We just need him to kind of put that together and get that confidence going and keep him on the field.”

On Cameron Rupp– “He’s shown that he’s come a long way in a short period of time.  He’s a heck of a defensive catcher and he belongs in the big leagues and he’s going to be there, hopefully, back up there pretty soon.”