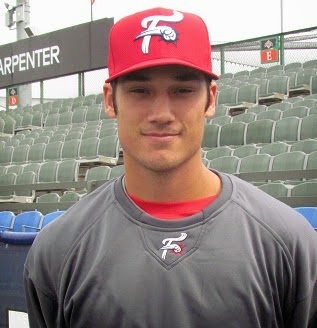 In a short amount of time, outfielder Cameron Perkins has made a name for himself in the Phils system.  The 23-year-old is among the Double-A Reading Fightins starting outfield less than two years after he was drafted in the 6th round out of Purdue University.

Upon debuting in the minors, Perkins batted .294 with a home run and 41 RBI in 72 combined games with the Gulf Coast League Phillies and short-season Class A Williamsport in 2012.

Last year, despite missing some time with Class A Advanced Clearwater due to an injury, the six-foot-five 195 pound righty hitter posted a .295 average with six homers and 53 RBI in 103 contests.

This week, I spoke with Cam, who shared his thoughts on his quick progress as a pro, his coaching staff with Reading, his strengths as a player and plenty more.  Read ahead for that full interview.

-What are your thoughts on starting out your second full pro season in the Eastern League at the Double-A level?

You know, I’m excited. I mean, as long as you’re climbing the ladder and not going backwards, or what everyone says, if you’re steadily moving up, it’s good.  I’m excited to be here.  It looks like a fun town.  I’m used to playing in cold weather, being from up north, so that’s not gonna effect me too much, I feel like.  And it looks like it’ll be a lot of fun.

-Last year in Clearwater, you had a good season down there.  What can you share about your time playing in the Florida State League?

It was a pretty solid year.  You know, I would have liked to win more games, but I feel like that’s (the same) with anyone.  Offensively, I came to play and I had a lot of things go my way.  I hit some balls hard, had some good swings.  Besides breaking my wrist and being out for that time, I couldn’t have asked for a better season.

-You’ve progressed upward in the Phils system at quite a solid pace.  How pleased are you with the progress you’ve made since you were drafted?

So far, my professional career has gone how I want it to go.  But, even if you don’t move up as quickly as I did, all you can do is go on whatever roster they put you on and play as best you can.  That’s really all that’s in my control.  I can’t control where they put me or if I’m in the lineup that day.  All I can control is, what can I do to help my team win?  Getting a bunt down, catching a fly ball, cutting a ball off in the gap.  What can I do to help the team win that day?  That’s what I like to focus on.

-If you were asked to scout yourself, what would you cite as some strengths for yourself?

I’m a pretty aggressive hitter.  I feel like I put the ball in play pretty consistently.  I swing at a lot of pitches, but that’s kind of my game.  I go up there and I’m ready to hit, so it helps me out because I can find balls to hit early in the count, but then sometimes it gets me in trouble.  I’m pretty aggressive.  It’s a good thing for knocking in runs.

-Who are you rooming with this season?

My roommates this year are Perci Garner, Hoby Milner and Aaron Altherr once he gets here.  It’s a pretty fun group.  We like to goof around and play a lot of video games.  Pretty laid back.  It’s going to be a lot of fun this year.

(Altherr is currently on the disabled list with a wrist issue)

-What are your impressions of the coaching staff here with Reading thus far?

I like it.  I think, Coach Ducey, he’s new to the organization, so he’s new to not just myself.  And he’s a guy that definitely wants to get after it and work.  You know, he’s not there to sit around like some guys.  If you’re doing anything, you should be doing it with a purpose.  That’s his motto.  And Dusty (Wathan), I mean I really like him.  He’s definitely a players’ coach.  He likes to play the kind of baseball that I like to play.  I’m the kind that’s going out there, fundamentally, I need to be able to hit and run, hit the ball and move runners.  It’s fun when you play baseball that way, when you play fundamentally sound and you’re scoring runs by not hitting it over the fence.  It’s a lot of fun.  That’s the kind of baseball he wants to play and I feel like that’s the kind of baseball we are going to play as a team.

-Who were some players that you looked up to prior to turning pro?

Before I turned pro…I was always a Craig Biggio and Jeff Bagwell fan.  I really liked how Craig Biggio played.  He played hard and he was a scrappy guy.  But, I always enjoyed watching Vladimir Guerrero, cause I always classified myself- obviously, he’s miles and miles ahead of me, but he would swing at a ball that’s in the other batters box and hit it over the fence somehow and that’s my goal, if I swing at a bad pitch, I can still hit it pretty well!