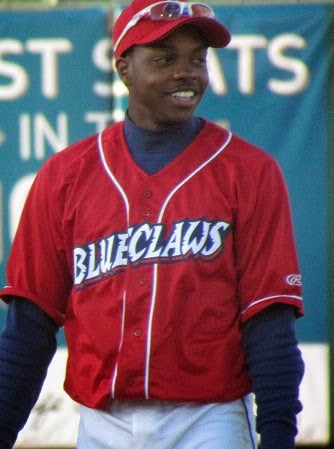 Out of action since last year following a ruptured Achilles tendon, shortstop Roman Quinn is nearing a return to game action.

While recovering from a broken left wrist suffered when was he hit by a pitch last season, Quinn felt a pop in the back of his right ankle as he ran routine sprints early in the 2013/2014 off-season.  Surgery to repair the second significant injury of his year took place shortly afterward.

Now, after nearly a half-year of recovery, the switch-hitting Quinn is just about ready to participate in games.

The youngster who is known for his speed doesn’t anticipate his quickness suffering due to the damage he did to his Achilles.  In fact, Quinn feels he could be faster than ever and hopes to improve all around.

Quinn, the Phils’ second round draft choice in 2011 out of Port St. Joe High School in FL, has posted a .260 average with six home runs, 44 RBI and 62 stolen bases in 133 combined games with short-season Class A Williamsport and Class A Lakewood over two professional seasons.

April 29th will mark six months since Quinn had the procedure to repair the damaged tendon.  The 20-year-old expects that shortly after that date he’ll begin getting into some games with the Phillies’ extended spring training team.  He can hardly wait.

Another infielder getting close to joining the extended spring training roster is third baseman Mitch Walding.  After dealing with recurring issues following a broken rib suffered last season, the lefty batting youngster had the rib removed this spring.

The Phillies’ 5th round draft pick in 2011, Walding has been fully active in batting and fielding practice in recent days and expects to participate in game action next week.

Walding, who batted .227 with two homers and 73 RBI in 184 combined games with Williamsport and Lakewood over the past two seasons, is quite ready to see his name in the lineup.

“(I’m) pretty anxious.  Watching everyone play makes me want to get back at it pretty bad,” Walding stated.