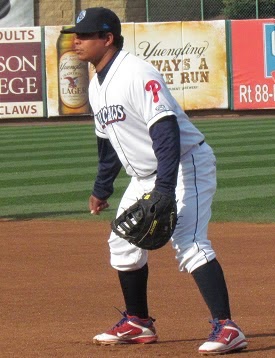 For Willians Astudillo, it doesn’t matter what position he’s assigned to on defense, as long as his name is written in the lineup.  His coaches find a way to make that happen.

Astudillo is most often manning first base for the Class A Lakewood BlueClaws this season, but he is listed on the club’s roster as a catcher.  The Venezuela native, who entered the season without a definitive position locked in place, has earned playing time at the plate as the ‘Claws’ most consistent batter.  As a pro, he has played every infield position as well as right field and left field.

“Whatever (position) I have a chance to play, I want to help,” Astudillo asserted through an interpreter, coach Lino Connell.   “I’ll feel the same about any position.  Before I signed, I played a lot of infield, so changing from catcher to the infield, it’s not really a big deal.”

What is a big deal is the 22-year-old’s offensive output.  Sporting a sizzling  .406 average following Tuesday’s 9-4 win at Lexington, Astudillo has made it nearly impossible for the team’s manager Greg Legg to not find a spot for him on a nightly basis.

“He puts the ball in play, gives himself a chance every at bat,” Legg stated about Lakewood’s versatile leader.  “He stays inside the ball.  He’s found some holes.  He gives you at least two good at bats every night.  He’s a hot hitter right now.”

On top of his South Atlantic League leading batting average, Astudillo, who was signed as an amateur free agent in 2008, has also laced four doubles and a home run while driving in 11 runs in 17 games.  His .931 OPS is also among the league leaders.

Astudillo missed the entire 2013 campaign with a left knee injury and feels that the down time really helped him appreciate the game and develop his own mental toughness.  Missing time on the field gave the youngster, that is generously listed at 5-foot-9 and 195 pounds, the drive to improve and increased his focus as he studied the game.

Additionally, the righty hitting Astudillo feels the time rehabbing in Florida at the Phillies’ spring training home and watching all the game action going on through spring and summer, with the extended spring training team that becomes the short-season Class A Williamsport Crosscutters as well as the Class A Advanced Clearwater Threshers, made him feel anxious and increased his love of the sport.

The focus on getting back to the diamond has turned out nicely for Astudillo, who has developed a hefty amount of confidence.  It shows with the way he fields questions, with his fun, loose demeanor around the ballpark, with the way he creates energy for the team, and with his performance on the field.

“I am all about confidence.  I see a lot of work to do to improve, but to be able to get to this level, I have a lot of confidence in myself.”

With a multitude of mitts and a bat that won’t quit, Astudillo appreciates his spot and plans to stay hot to help the BlueClaws win games this season.