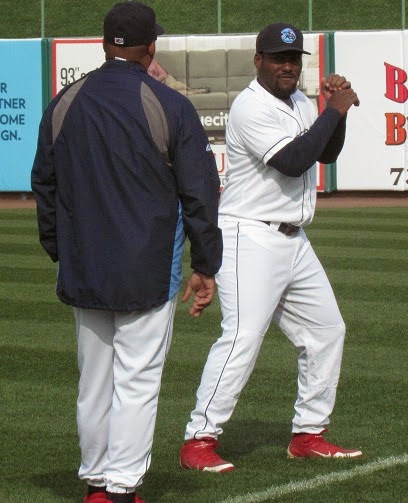 -Good news this week for Larry Greene Jr., who was previously said to have required surgery to repair his ailing left wrist.  The 21-year-old outfielder has resumed game action after spending time in a brace and is playing intrasquad games with the group that is slated to become the Gulf Coast League Phillies.

The Phillies’ top draft pick from 2011 anticipates that he could be activated for the Class A BlueClaws by July 1st.  Greene’s original diagnosis was a cartilage tear.

Prior to being sidelined, the Georgia native posted a .167 average with five RBI and two steals in 15 games with Lakewood this year.

The GCL kicks off its season this coming Friday.  Greene could continue action there once their season begins.

-Two other outfielders made their returns for the Double-A Reading Fightins on Tuesday.  Former 1st round draft selection Zach Collier (back) and 2009 second round pick Kelly Dugan (oblique) were in the lineup, going 2-for-4 and 1-for-4 respectively.

Collier and Dugan are each on the Phillies’ 40-man roster.

-In the Class A South Atlantic League All-Star Game, the contest finished in a 4-4 tie after 10 innings.  The game took place at the home of the Rangers affiliate Crawdads in Hickory, NC.

-For the short-season A level Williamsport Crosscutters, outfielder Jiandido Tromp collected three hits, including two home runs in a 12-5 win over Jamestown on Tuesday.  The 20-year-old Aruba native is 5-for-15 (.333 avg) through four games with the Cutters.

The righty batting Tromp was an All-Star for Williamsport last season, when he batted .299 with a homer and eight RBI through 33 games prior to being promoted to Lakewood.  He tallied a .224 average with a home run and nine RBI in 27 games with the BlueClaws earlier this season.